Trump versus Clinton on STEM 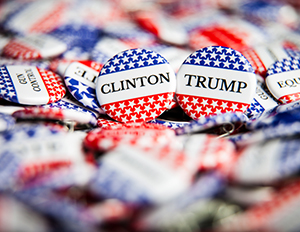 La Habra, United States - July 8, 2016: Close up of Vote election buttons, with red, white, blue and stars and stripes. Hillary Clinton is the democrat candidate and Donald Trump is the republican candidate for President of the United States

It’s been and will continue to be a very ugly, nasty Presidential election year, up until Election Day. Knowing where each candidate stands on the issues is as important as voting. A new report compares Hillary Clinton and Donald Trump’s position on technology, side-by-side.

Here is the breakdown of both candidates’ stances on technology and innovation, according to the report:

Clinton has spoken about establishing and expanding public-private partnerships to drive innovation and widely share its benefits.

Trump has been mostly silent on the issue of innovation.

Trump’s only positions on tech regulations are with regard to China. He wants the government to be tougher with China on issues including intellectual property theft.

On Immigrants With High-Tech Skills

Clinton would create a startup visa program, allowing entrepreneurs in tech sectors to create companies and jobs in the United States. She has supported H-1B visas in the past, and she has proposed raising the number of visas awarded.

Trump is opposed to H-1B visas. He has stated he is pro high-skilled immigration, but he has also proposed blocking Muslims from entering the United States, which would potentially ban some highly skilled workers in the process.

Trump wants to redirect funding to other projects, such as rebuilding the country’s infrastructure, and he is against funding scientific research or space missions.

Trump said there is no shortage of STEM workers just because some STEM graduates can’t find jobs in their field.

You can read the ITIF’s report in its entirety.