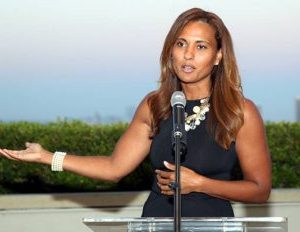 When Christine Simmons arrived at UCLA as a student, her plan was to be a pre-med major. But she soon realized, through her work as a leader in a number of student organizations, that her passion laid elsewhere.

The current President and Chief Operations Officer of the Los Angeles Sparks WNBA franchise brings an energy and commitment to diversity, while directing and coordinating all aspects of the team’s business operations. Simmons is not only one of the brightest young voices in the sports business world, she’s determined to utilize the platform that she’s earned through her intelligence, hard work, and networking, to advocate for communities of color. Her mission is to assist in the elevation of the disempowered and disenfranchised.

As a working mother and woman of color, Simmons’ example and leadership is an inspiration to many. The Shadow League sat down with Simmons in Los Angeles to hear about the Sparks’ 2016 WNBA Championship (their third title) and learn about her own journey, what’s important to her, and where she plans to go from here.

This article was previously published on theshadowleague.com.Â

The TSL Leadership Series focuses on men and women of color who are blazing a trail through the world of sports. Athletes, coaches, executives and media personalities are some of those who are leading the charge and driving success both on and off the field of play.