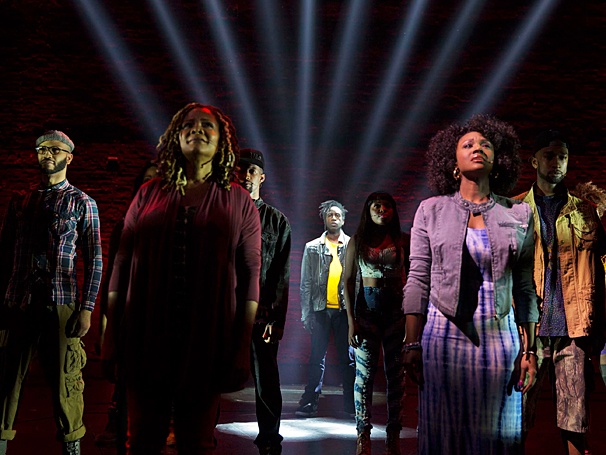 The rap musical “Holler If Ya Hear Me,” that pays homage to the music ofÂ  late rap icon Tupac Shakur will be short lived on Broadway. The show closes this Sunday after opening June 19 to mixed reviews and after only 38 regular performances and 17 previews. “Holler” grossed a little more than $942,000 as of July 13, which means that producers won’t recoup their $8 million capitalization.

My initial reaction is what a pity because conceptually, a Tupac musical had great potential. Rolling Stone wrote that “There isn’t a single rapper more suited for the concept than Tupac Shakur, the most emotionally rich, psychologically complex, lyrically candid figure hip-hop has seen its 40-year history.â€ I couldn’t agree more. “Holler” beautifully weaves 21 of Shakur’s songs (two of which are actually musically arranged versions of his poems).

But the show suffered from a trite storyline and mediocre performances by newbies who were overshadowed by Broadway veterans such as Tony Winner Tonya Pinkins and “In The Heights’s” Christopher Jackson and slam poet Saul Williams. With hip-hop dance so mainstream and popularized by shows like “America’s Best Dance Crew” and the “Step Up” film series viewers, the poor execution of “Holler’s” choreography was also glaring.

The show’s kinks could have been worked out had “Holler” gone the workshop route at a regional theater or an Off Broadway venue. As has been the case with other similar hip-hop musicals including “In The Heights” and “Bring in ‘da Noise, Bring in ‘da Funk.” Instead, “Holler’s” green producers opted for a cold run on Broadway.

In typical Broadway fashion with shows about black culture and featuring black cast, “Holler” also did a poor job of marketing to black audiences. It also showed how white Broadway producers continue to treat black media (print, radio, and digital) as an afterthought or fail to reach out at all to black journalists and bloggers. “Holler” also reinforced the model of having majority marketing firms as the agencies of record among Broadway producers even with black-themed musicals and plays.

“Holler” is produced by Afeni Shakur (Tupac’s mother) but the lead producers are Jessica Green, Marcy Kaplan-Gold, Eric L. Gold, a longtime Hollywood manager, and a producer new to Broadway, Shin Chun-soo (a South Korean theater impresario). Speaking on behalf of the producers, Gold said in a statement, “It saddens me that due to the financial burdens of Broadway, I was unable to sustain this production longer in order to give it time to bloom on Broadway. Tupac’s urgent socially important insights and the audiences’ nightly rousing standing ovations deserve to be experienced by the world.”

In an interview he gave to Variety before the closing announcement, Gold said, “If we don’t succeed, it’s going to be very difficult to do another rap or hip-hop show on Broadway,â€ suggesting that producers would cite the show’s failure as proof that Broadway audiences – who are overwhelmingly white – resisted “Hollerâ€ because they found the music unfamiliar or unappealing, notes the New York Times.

However, other hip-hop oriented musicals were successfully executed and enjoyed long Broadway runs. Again, “In the Heights” with music and lyrics by freestyle rapper Lin-Manuel Miranda, involved an ensemble cast of characters in the largely Dominican-American neighborhood of New York City’s Washington Heights. It was performed at a regional theater in Connecticut in 2005, Off Broadway in 2007 and then in a Broadway theater from 2008-2011, grossing more than $105 million. It also went on to enjoy a non-equity tour.

“Bring in ‘da Noise, Bring in ‘da Funk,” was a musical revue that told the story of black history from slavery to the 1990s through tap and rap.Â  The show was conceived and directed by George E. Wolfe with lyrics by poet Reg E. Gaines and choreographed (and starred) by Savion Glover. It debuted Off Broadway in 1995 and moved to Broadway in 1996. It ran until 1999, grossing more than $54 million.

While it is a rock musical, “Rent‘s” run further illustrates how “Holler” was prematurely birthed on Broadway.Â “Rent” was first seen in a limited three-week workshop production in 1994, opened Off Broadway in 1996 and moved to Broadway in 1996, closing after a 12-year run in 2008. The production grossed more than $280 million.

Would “Holler’s” producers have recouped their investment had they relied on African American A-List actors like Samuel L. Jackson (“Mountaintop”) or hip-hop moguls like Sean “Diddyâ€ Combs (“A Raisin In The Sun”) that seem to draw both black and white audiences in big numbers? Likely so. But then again, there are shows that have done financially well and have been around for more than a decade that never went the Broadway route or touted celebrities. The percussion performance “Stomp” is one Off Broadway show that comes to mind.

Another is “Platanos Y Collard Greens,” a play written by David Lamb and produced by his wife Jamillah Lamb that since 2003 has enchanted audiences of more than 200,000 people at Off-Broadway, at performing arts venues in other cities, and on tour at more than 250 colleges in more than 30 states across the country. It is a romantic comedy that explores relations between African Americans and Latinos in New York City through a relationship between two college students. To refresh this hugely successful show, the Lambs recently added a Caribbean character, changing it to “Platanos, Collard Greens Y CALLALOO.”

“Holler’s” producers could not obtain the biographical rights to Shakur’s story. According to the Hollywood Reporter, it was announced earlier this year that filmmaker John Singleton signed on to rewrite, produce and direct a movie that chronicles Shakur’s prolific rise as a rapper and actor, his infamous legal troubles, his time at Death Row Records and his death at age 25 in a 1996 Las Vegas shooting, which came at the height of the much hyped East Coast-West Coast rap rivalry.Â Shakur’s mother also will serve as an executive producer on the film.

So finally, 2Pac fans in search of his biopic will have something to holler about.