Twitter Chides Media For Lack Of Coverage Over #NAACPBombing 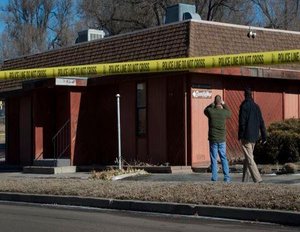 In the wee hours of Tuesday morning, January 6, of the new year, a bomb, was set off next to the exterior wall of the local offices of the Colorado Springs, Colorado, NAACP headquarters. You’re likely to not have heard this news or had your regularly scheduled programming interrupted because the mainstream press failed to report on it when the story broke.

According to the FBI and tweeted images from the scene of the crime, a gas can was seen next to the bomb, which intended to make the impact much worse. Luckily, the canister did not catch fire when the improvised explosive device was detonated. A suspect has been listed as a white male, balding, in his 40s, driving a dirty pickup truck. No one was injured and no arrests have been made yet.

What’s even more infuriating is that the major press is just now reporting on the situation. Places like ABC and CBS are focusing on the foreign gun attack with the satirical magazine, Charlie Hebdo, where 12 people lost their lives. Yet, Americans here and abroad are baffled as to why the press has either ignored or is late in reporting a domestic terrorist attack using a weaponized explosive. With too many questions on the table and not enough answers, this is not the first time the NAACP has been targeted by enemies of civil liberties. Back in 1951, NAACP leaders Harry and Harriet Moore were killed when their Florida home was bombed by attackers on Christmas Day.

No suspects were ever considered, convicted, charged, or even arrested for the couple’s murder.

As noted by Shaun King and the Daily Kos website, the NAACP Legal Defense Fund was in the process of asking Missouri Circuit Court Judge Maura McShane to appoint a special prosecutor in the case against former Ferguson Police officer Darren Wilson. Add to that, the grand juror who is currently suing St. Louis County Prosecutor Bob McCulloch, and you have the makings of quite an exposition. Sad, though, that popular media publications are late to the story or wholly ignoring the event even took place.

In an era where racism is flashed along the ticker, the pick-and-choose nature of the media to ignore this act of domestic terrorism should be noted. Everyone from FOX to NBC did not report of the bombing until this very morning. CNN reported on the situation a full 16 hours after it happened, and the incident still has yet to be mentioned on the nightly news broadcast. Twitter, which has defined itself in these moments as the breaking news medium of the 21st Century, has not only documented the tragic event, but has taken the media to task for its lack of coverage.

The hashtag #NAACPBombing became the No. 1 trending topic on Twitter by Tuesday night, and at the time of publication, is still the No. 2 trending topic in the United States. Social media users are shocked, angered, and frustrated that they had to learn about such a disturbing incident from Twitter. We captured Twitter’s growing frustration that has stemmed from the bombing, the lack of indictments for Eric Garner and Michael Brown, and highlight the social world’s belief in the miscarriage of justice in the media.

You can see what was said in full on the following pages below. Please speak your own piece in the comments section!