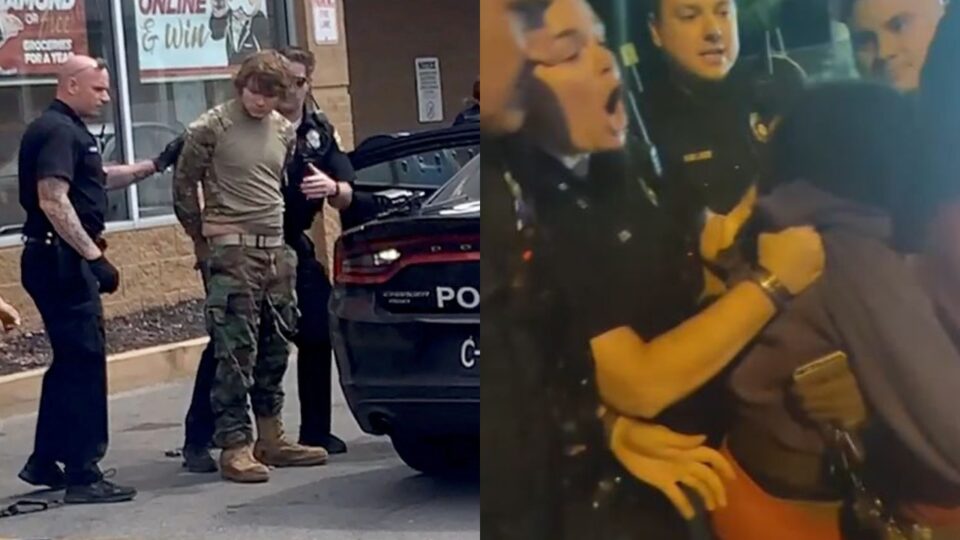 (Image: From left to right police and Payton Gendron, police and Jamir Bradford)

It’s no secret that Blacks are treated like criminals, even when they are not. Several times over the years, we’ve seen racist white killers be treated with kid gloves by police officers, who wouldn’t hesitate to shoot an unarmed Black man. The latest racist killer, Payton Gendron, killed multiple people, many of whom were Black. Gendron has also been handled gently, despite killing 10 people.

The 18-year-old suspect was apprehended and charged with first-degree murder at Buffalo City Court Saturday night after firing bullets inside of Tops grocery store in Buffalo, N.Y. His targets were innocent, unarmed Black shoppers who had no clue they were being preyed upon. The white male live-streamed his criminal act on the social platform, Twitch.

Social media users took the police force to task because of how they handled the suspect. In several Twitter posts, users compared how no force was used to apprehend the white killer, yet, just weeks earlier, in Syracuse, N.Y., an eight-year-old boy was forcefully taken off his bicycle because it was alleged that he stole a bag of potato chips from a store.

Some users listed Black victims of police officers as unarmed citizens who had committed no crime, while naming white criminals who committed heinous crimes but were treated as if they were not perpetrators.

#BREAKING Several people wounded during shooting attack in a supermarket in Buffalo, NY.
Suspect arrested, described himself as a white supremacist and anti-semite in an online manifesto pic.twitter.com/F2ZPSWUSCb

The white supermacist who shot and killed 10 with an AR15 at a supermarket in a predominantly black neighborhood in buffalo, NY was treated better by police than this black child who grabbed some chips from the store. pic.twitter.com/pOOr9CYNHx

Of course, how can we forget the alleged nonviolent crime George Floyd was accused of. Floyd was killed because he happened to be an unarmed Black man who lost his breath as a white police officer kneeled on his neck for more than nine minutes.

Here is a juxtaposition, #GeorgeFloyd got a knee on his neck for more than 9 minutes from a white cop; #PaytonGendron, kills 10 black people in a supermarket; and there not a mark on his body. No bruises, no lacerations, nothing. pic.twitter.com/p5L3iCnUhS

There were also mentions of other armed, white killers who did not suffer a scratch when apprehended.

The Tamir Rice killing by police officers who “feared for their lives” was another example of how officers have zero respect for Black lives, even if it’s the life of a Black child only 12 years old holding a toy gun.

Cops killed 12-year-old Black child Tamir Rice in 1.7 seconds for holding a toy because cops “feared for their lives”—but calmly arrested 18-year-old white supremacist Payton Gendron while he murdered a retired cop, and then 9 more people.

It was never about “complying.”

Sadly, there are many more examples of how white criminals are treated versus how unarmed innocent Blacks are slaughtered.

Payton Gendron no different than the cowards who were heavily armed white supremacist, mental health freaks in this photo, same for Kyle Rittenhouse, The Race Soldiers..
Greatest Threat To This Nation..White Supremacy..Where is the Mulford Act for white people like these cowards pic.twitter.com/tn3UT8puCN

Not even a week ago, body cam footage was finally released of cops killing Quadry Sanders, an unarmed black man with his hands up. 15 shots were fired. Today we watch an armed Payton Gendron be brought in alive, after slaughtering 10 people in Buffalo. This is America. I’m tired. pic.twitter.com/q3f8q4pnVk

You don’t need to be a “bleeding heart liberal” to be outraged.
Just human.