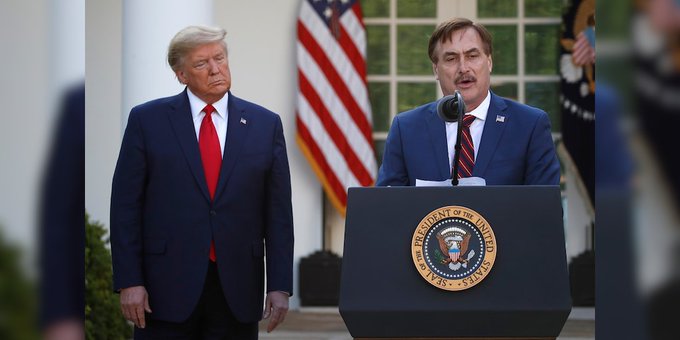 Some Republicans and Trump loyalists continue to falsely claim that the presidential election was “stolen” although President Joe Biden has been officially sworn into office. According to The Associated Press, MyPillow CEO Mike Lindell has been permanently banned from social media giant Twitter after blatantly disregarding a warning to stop spreading false information regarding the 2020 election.

Lindell has been extremely vocal with the election being “stolen” from his friend former President Donald Trump. Although it wasn’t clear which of his recent Twitter posts got him removed from the site, Twitter took the steps to ban Lindell, who is the CEO and founder of MyPillow, due to his “repeated violations” of its civic integrity policy, a spokesperson said in a statement to The Associated Press. The policy was implemented just last September to curb the spread of disinformation.

Just last week, Lindell said he was losing business because he refuses to drop the voter fraud narrative that Trump and his allies have been pushing since the election. Lindell claimed that retailers Bed Bath & Beyond, Kohl’s, H-E-B, and Wayfair have decided to drop his MyPillow products in their stores.

According to Newsweek, Lindell, during an interview with the Right Side Broadcasting Network’s Brian Glenn, said, “I just got off the phone with Bed Bath & Beyond. They’re dropping MyPillow. Just got off the phone not five minutes ago. Kohl’s, all these different places. These guys don’t understand … they’re scared, like a Bed Bath & Beyond, they’re scared. They were good partners. In fact, I told them, ‘You guys come back anytime you want.’”

Back in November, Lindell was in the news for bailing Kyle Rittenhouse, the 17-year-old gunman who fatally shot two Black Lives Matter protesters and injured a third during a demonstration in Kenosha, Wisconsin, out of jail. Rittenhouse was released from jail on $2 million bail with help from former child actor Silver Spoon’s Ricky Schroder and Lindell.