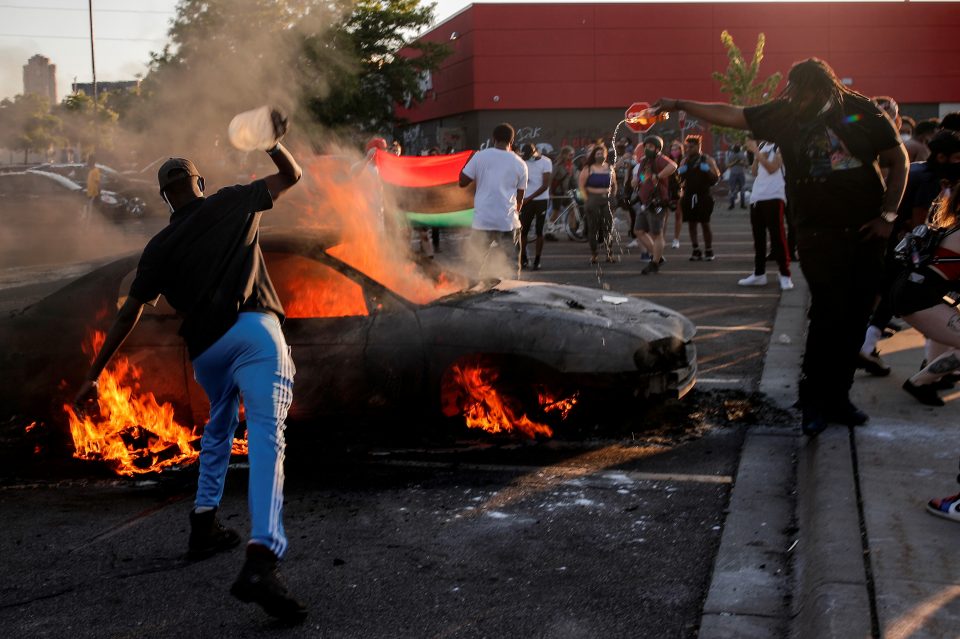 FILE PHOTO: People react as a car burns at the parking lot of a Target store during protests after a white police officer was caught on a bystander's video pressing his knee into the neck of African-American man George Floyd, who later died at a hospital, in Minneapolis, Minnesota, U.S., May 28, 2020. REUTERS/Carlos Barria/File Photo

By Subrat Patnaik and Shubham Kalia

(Reuters) – Twitter hid a tweet by U.S. President Donald Trump behind a warning on Friday, accusing him of breaking its rules by “glorifying violence” in a message that said looters at protests in Minneapolis would be shot.

Twitter’s decision to step in escalates a feud between Trump and tech companies, and comes at a time of racially charged civil unrest in cities across the United States over the death of George Floyd, a black man seen on video gasping for breath while a white police officer knelt on his neck.

Trump responded by accusing the company of targeting him, Republicans and other conservatives for censorship. He threatened to impose new regulation on internet companies and called on Congress to revoke a law that protects online platforms from lawsuits over content.

Trump’s tweet tagged by Twitter read: “…These THUGS are dishonoring the memory of George Floyd, and I won’t let that happen. Just spoke to Governor Tim Walz and told him that the Military is with him all the way. Any difficulty and we will assume control but, when the looting starts, the shooting starts. Thank you!”

Trump’s message can now be seen only after clicking on a notice which says: “This Tweet violated the Twitter Rules about glorifying violence. However, Twitter has determined that it may be in the public’s interest for the Tweet to remain accessible.”

Trump issued his tweet amid days of unrest in Minneapolis, which was engulfed in a third night of arson, looting and vandalism as protesters vented their rage over Floyd’s death.

Trump has condemned the killing of Floyd and promised justice. Four police officers involved in Floyd’s death have been fired and the FBI is investigating.

A Twitter spokeswoman said CEO Jack Dorsey had been informed of the decision to tag Trump’s tweet before the label was applied. The decision was based on a policy in place since June, 2019, which the company said it had applied previously, pointing to a tweet by a Brazilian cabinet member in April this year.

“Twitter is doing nothing about all of the lies & propaganda being put out by China or the Radical Left Democrat Party. They have targeted Republicans, Conservatives & the President of the United States. Section 230 should be revoked by Congress. Until then, it will be regulated!” Trump tweeted on Friday.

Section 230 refers to a law that protects social media platforms from lawsuits over content that appears on them.

Floyd’s death was one of several killings of black people in the United States in recent months that has provoked outrage. The Minneapolis night sky was lit up with flame from a police precinct that had been torched overnight. In the morning, riot police in gas masks arrested a CNN film crew on live TV, leading them away in handcuffs from streets that resembled a war zone. More than an hour later, the crew was released.

Protests took place in other U.S. cities including Louisville, Kentucky, where police said seven people were shot. Protesters there vented rage over the police killing of Breonna Taylor, a black woman shot in her apartment in March.

Twitter said it acted over the Trump tweet “in the interest of preventing others from being inspired to commit violent acts”. People will still “be able to retweet with comment, but will not be able to like, reply or retweet it”.