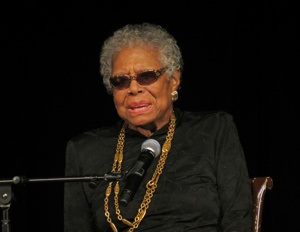 Twitter users created the #MayaTaughtMe hashtag to share what they learned from the world-renowned poet. (Image Credit: York College)

On Wednesday, author, poet, and civil rights activist Maya Angelou, passed away in her home in Winston-Salem, North Carolina. She was 86 years old.

Born Marguerite Johnson, Angelou’s works include seven autobiographies, more than a dozen books of poetry, and even two cookbooks, among countless other pieces of literature.

She has 50 honorary degrees, and served on two presidential committees. She was also awarded the Presidential Medal of Freedom, the highest civilian honor in the country, by President Barack Obama.

Her long and distinguished history of civil rights activism as well as her wisdom conveyed in her literature have inspired countless people to believe in themselves and achieve their potential.

Many people affected by Angelou’s work have taken to Twitter using theÂ #MayaTaughtMe hashtag to express their adoration and the influence she’s had on their lives.

#MayaTaughtMe that words don’t have to come from a white male tradition to be worthy of being listened to. – Brokey McPoverty (@brokeymcpoverty) May 28, 2014

reading your work as a little girl, i knew i wanted to be a writer. thank you. legend lived. legacy left. #MayaTaughtMe #MayaAngelou ðŸ™Œ – kco (@kcoSpoke) May 28, 2014

#MayaTaughtMe that I need to love myself and care and believe in myself as WOC – Ayesha (@ashsultana) May 28, 2014

“Listen to yourself and in that quietude you might hear the voice of God.” #MayaTaughtMe – Daniel JosÃ© Older (@djolder) May 28, 2014

#MayaTaughtMe Black is beautiful. Black is wondrous. Black has meaning. and depth. and soul. and character. and vitality. Black is love. – Joel Leon. (@JoelakaMaG) May 28, 2014