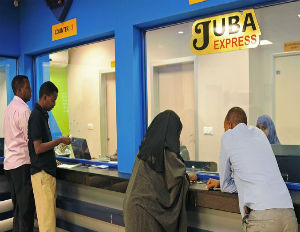 A U.S.Â attempt to control terrorists has led to a dilemma among Somali families. “Regulations intended to block money from getting into the hands of terrorist groups has led the last bank that handles most money transfers from the United States to Somalia to pull out of the business,” according to NPR. Refugees from the country who are now living in the United States can no longer send money to their families.

[Related: Is Paid Leave a Worker’s Right or Privilege?]

Many Somali families rely heavily on the funds sent to them from their relatives in America. NPR reports that Omar Shekhey, who lives in Georgia, saves a couple of hundred dollars every month to send to his two sisters in Somalia. “It’s money that they need to survive. There are no jobs; nothing. They will starve. If they don’t get this money they will starve,” he tells the news source.

Merchants Bank of California, the last of U.S. banks to handle these international transfers, put a halt to the service. Bank representatives expressed concerns about “meeting federal banking requirements, which are intended to stop the flow of funds to criminals and terrorists.” Those requirements are a result of the United States’ efforts to stop transfers from reaching terrorists, like the terrorist group al-Shabab that recently released a video threatening attacks onÂ U.S. shopping malls.

Member of Congress are scheduled to meet with the Obama administration today to work on a solution. Mohammed Jama, executive director of the Abu Bakr Islamic Center in Tukwila, tells Seattle’s KPLU that he hopes the government will take on the services the California bank previously handled, connecting wire-transfer businesses here with distributors in Somalia.