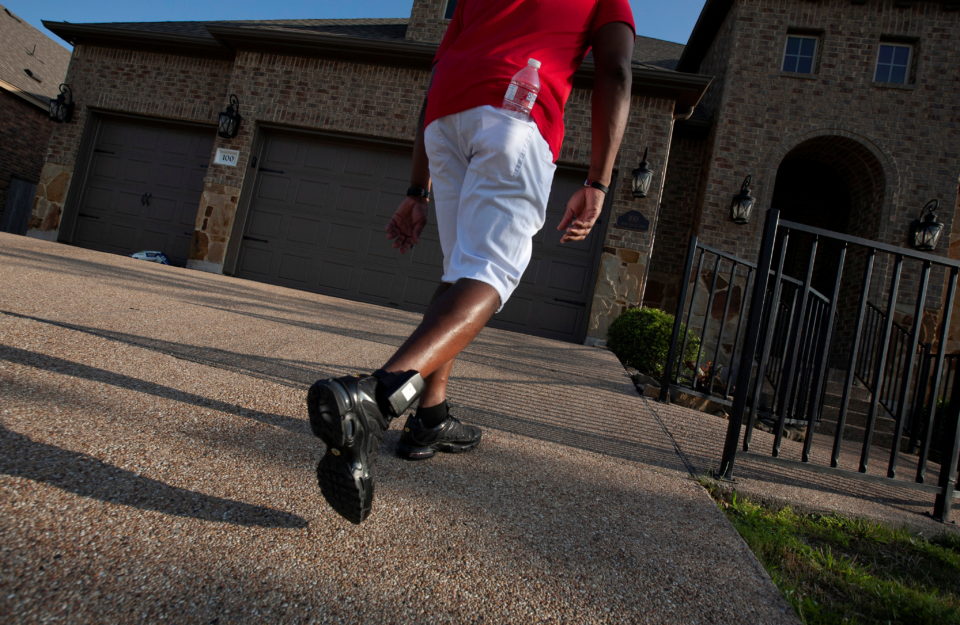 FILE PHOTO: Kendrick Fulton, who was released to home confinement due to the coronavirus disease (COVID-19) pandemic, finishes his first walk since he had knee surgery in Round Rock, Texas, U.S., April 8, 2021. He wears an ankle monitor that he must charge nightly in order to comply with the terms of his release. REUTERS/Nuri Vallbona

Reuters – A coalition of U.S. criminal justice reform advocates on Wednesday sent the Justice Department a proposal to help prevent the Bureau of Prisons (BOP) from sending thousands of federal inmates released during the pandemic back to prison.

In a letter to department officials, the groups offered the Justice Department an analysis, which concludes that the BOP has legal authority to keep people out on home confinement after the emergency is lifted.

A Justice Department spokeswoman did not have any immediate comment.

In March 2020, Congress authorized the department to declare an emergency so it could expand the pool of low-level, non-violent federal inmates who could qualify for home confinement, to contain COVID-19‘s spread throughout the federal prison system.

But in January, the department’s Office of Legal Counsel issued a memo which found that once the emergency is lifted, the BOP will have no choice but to “recall prisoners in home confinement to correctional facilities” because the authority to send more people home was temporary.

To date the emergency has not been lifted, and with the spread of the highly transmissible Delta variant, it is not immediately clear when it will be.

Still, criminal justice advocates have urged the Biden administration to take action to make sure vulnerable inmates are not forced back into prison.

BOP Director Michael Carvajal told lawmakers in April that only a legislative fix from Congress will be able to prevent them from recalling inmates back home.

In their letter, the groups said the Justice Department had misinterpreted the law, and that it has the power to act now.

“The authority of the Bureau of Prisons to grant and revoke home confinement is the same as it always was under the pre-existing statutory scheme,” they wrote. “We encourage you to reassess the memo because it is incorrect.”

The letter was signed by Families Against Mandatory Minimums, Democracy Forward Foundation, Justice Action Network, the National Association of Criminal Defense Lawyers, the Tzedek Association and The Leadership Conference on Civil and Human Rights, which was recently led by now-Associate Attorney General Vanita Gupta.