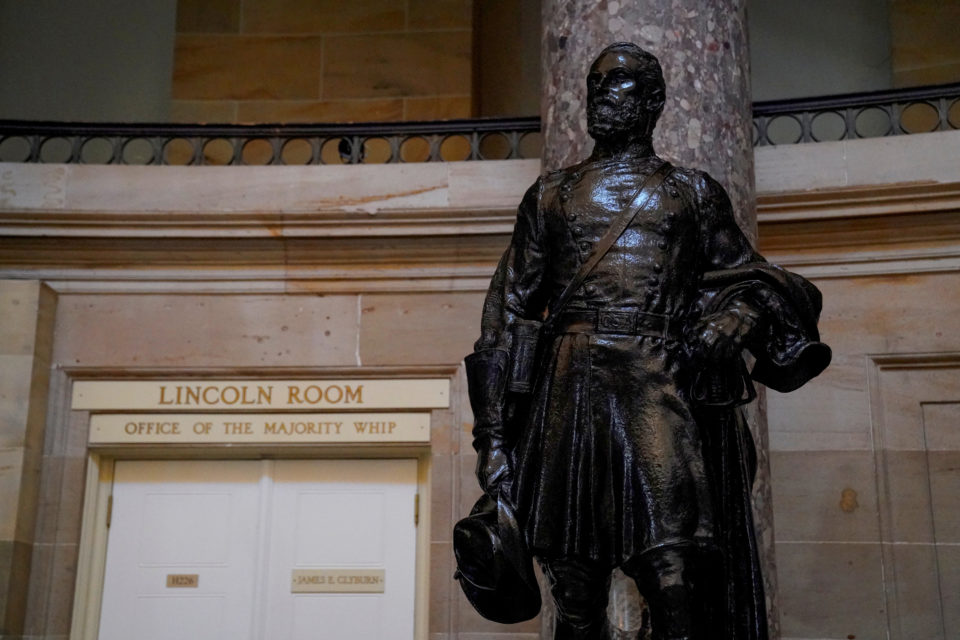 FILE PHOTO: A statue of Confederate Joseph Wheeler is displayed in the U.S. Capitol in Washington, U.S. July 23, 2020. REUTERS/Erin Scott

Reuters – The Democratic-controlled U.S. House of Representatives on Tuesday passed a bill to remove statues honoring those who upheld slavery or backed the Confederacy from the Capitol building, which displays statues selected by all 50 states.

It is the second year in a row that the House passed the bill, which the then-Republican-controlled Senate in 2020 declined to take up. Democrats now have a razor-thin Senate majority, which could allow them to force a vote on the measure, which would need the support of 10 Republicans to pass.

The bill passed the House 285-120 with all the votes against the measure coming from Republicans.

The statues and busts targeted by the “Remove Hate” bill include one honoring former U.S. Chief Justice Roger Taney, who authored a key decision supporting slavery. They also include leaders of the rebellious Confederacy — whose battle flag was seen in the Capitol on Jan. 6 when supporters of then-President Donald Trump launched a deadly attack that attempted to overturn his election defeat.

Taney’s bust would be replaced by one of former Supreme Court Associate Justice Thurgood Marshall, the first Black man to serve on the high court.

UPDATE: The House has once again voted to remove the bust of Roger Taney—the Supreme Court Justice who supported slavery and authored the Dredd Scott opinion—along with other confederate statues from the Capitol.https://t.co/NXtdxSwgu3

House Speaker Nancy Pelosi, a Democrat, said removing the statues will not erase the stain of racist acts from U.S. history, nor will it erase racism in the United States today. But she asked, “How can we expect to end the scourge of racism … when we allow the worst perpetrators of that racism to be lauded in the halls of Congress?”

Opponents said it would be wrong to dictate to individual U.S. states whom they can honor by sending statues to the Capitol. Republican Representative Mo Brooks of Alabama said the bill was an example of “cancel culture and historical revisionism” by “elitists who claim they know more than regular citizens.”

Taney wrote the majority opinion in the 1857 “Dred Scott” case, ruling that Black Americans could not be considered citizens and that Congress could not prohibit slavery. It later was overturned by the 14th Amendment to the Constitution, which was adopted in 1868.