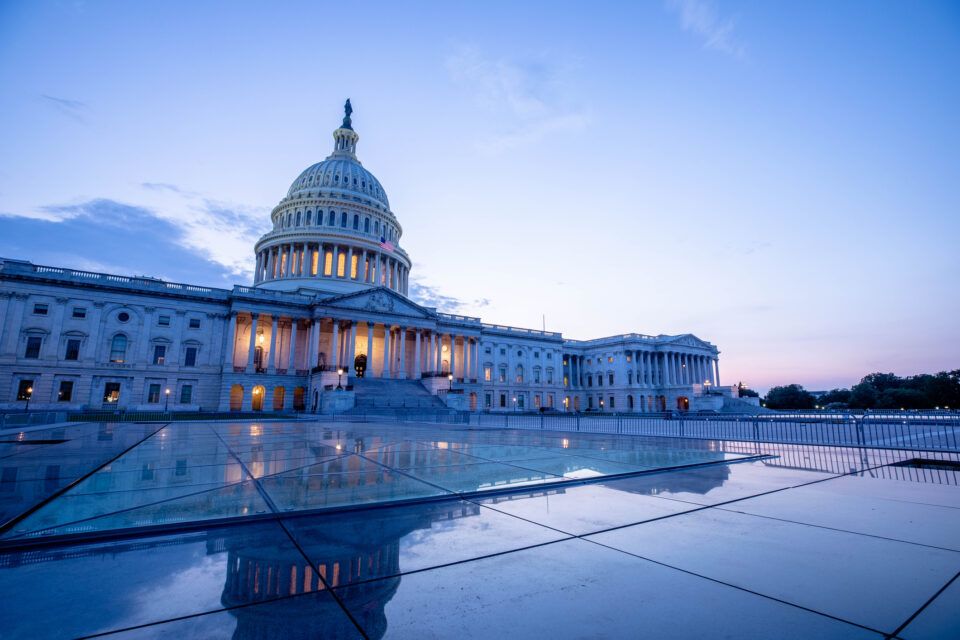 The US Capitol Building at dusk.

Reuters – The Democrats who control the U.S. Senate were bracing for a likely loss on Monday in a vote on a bill to fund the federal government and lift the nation’s debt ceiling, as President Joe Biden’s party fought over the details of his sweeping social agenda.

If Republicans carry out a threat to block the legislation, which has already passed the House of Representatives, to fund the U.S. government through Dec. 3 and suspend the nation’s borrowing limit until the end of 2022, that will leave Democrats just three days to find another way to keep the government operating beyond Thursday – when current funding expires.

Lawmakers also will have to figure out how to raise the debt ceiling to head off the risk of default, with independent analysts warning that the U.S. Treasury Department is likely to exhaust its borrowing authority fully sometime between Oct. 15 and Nov. 4.

Democrats are eager to avoid such drama as they try to project competence after four years of Republican Donald Trump’s chaotic presidency.

Senate Majority Leader Chuck Schumer has not said what his next move is if the Monday night vote fails, though Republicans have indicated they would vote for a funding extension if the language suspending the government’s $28.4 trillion debt limit were removed.

Republicans have said they want Democrats to lift the debt limit on their own, saying they do not support their upcoming spending plans. Democrats point out that much of the nation’s new debt was incurred during Trump’s administration.

“We can’t give up on the idea that this should be done in a bipartisan way,” Democratic Senator Michael Bennet told Reuters. “It would be too damaging to the country to have it be done in partisan terms.”

In the meantime, Democrats are at odds over two pillars of Biden’s domestic agenda: a $1 trillion infrastructure bill and a larger $3.5 trillion social spending package.

The rift risks derailing Biden’s presidency and the party’s hopes of keeping its congressional majorities in next year’s midterm elections.

Biden spent the weekend negotiating with lawmakers over the phone, according to administration officials. The White House is trying to determine how much they will be able to spend and how to raise offsetting revenue, with an eye toward what can pass the Senate, which Democrats control only through Vice President Kamala Harris’ tie-breaking vote.

Biden told reporters that Democrats may not be able to agree on the details of the larger bill — which party leaders have already said will likely shrink — this week.

The House was expected to take up the infrastructure bill on Monday. But Speaker Nancy Pelosi delayed a vote on the legislation until Thursday to provide more time to broker an agreement on Biden’s more sweeping social plan. She is due to preside over a party meeting on Monday evening.

The infrastructure bill, which moderates favor, would fund road, bridge, airport, school and other projects. It passed the Senate last month with considerable Republican support.

But progressive Democrats have threatened to oppose the infrastructure measure unless moderates in both the House and Senate agree to the larger package, which Democrats intend to pass without Republican votes via a process known as budget reconciliation.