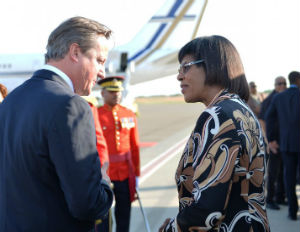 Prime Minister David Cameron’s visit to Jamaica this week has put the spotlight on an interesting question that has affected the lives and fortunes of countless blacks all over the world.

Do countries that were built on the backs of slaves owe a debt to those who still continue to struggle with the economic and psychological legacy of slavery?

Jamaica Prime Minister Portia Simpson Miller raised the question during Cameron’s visit, which made him the first British prime minister to visit the island in 14 years.

“It’s a vibrant debate here,â€ says Kingston, Jamaica- based culture and entertainment arts practitioner, Colin Oliver Leslie. “Most Jamaicans at home and some abroad are most upset with Cameron,â€ Leslie adds.

Jamaicans are upset because while apologizing for the role Britain played in Jamaica’s slave trade between 1807 and 1833, Cameron made it clear that he believes it’s time to move on.

“I do hope that, as friends who have gone through so much together since those darkest of times, we can move on from this painful legacy and continue to build for the future,â€ he said, speaking to Jamaica’s parliament.

Ironically, when the U.K. freed its slaves it paid what researchers are calling the modern-day equivalent of billions of dollars to slave owners to compensate for lost revenue because slaves were no longer ‘producing’ for them.

According to the BBC, some national commissions in the Caribbean have since called for former slave-owning countries to pay trillions of dollars in reparations to rectify what many in Jamaica feel is a travesty. Cameron himself had a relative who was reportedly paid the modern day equivalent of about $4.5 million. The loss of wealth, and the loss of the opportunity to create wealth, are obviously a big issue in the United States and part of the discussions about the wealth gap between blacks and whites here as well.

The Federal Reserve Consumer Finance Survey found the median white family had a net worth of $134,000 in 2013, while that of blacks was just $11,000. That means for every $1 of wealth white families had, black families had just 12 cents.

Bryan Stevenson, executive-director of the Equal Justice Institute and New York Times best-selling author,Â released research earlier this year showing how lynching in the South at the turn of the century forced millions of blacks to literally run for their lives, and run away from land and property that could have been a financial foundation for future generations.

“There’s no question that that kind of disruption–becoming a refugee and becoming an exile–takes away any accumulated wealth and stability.Â  Think of them as coming North as refugees burdened and stigmatized in ways that other immigrant communities were not,â€ Stevenson adds.

According to the Federation of Southern Cooperatives Land Assistance Fund,Â  land ownership among blacks peaked at 15 million acres in 1910, of which 218,000 black farmers were full or part owners.Â  A steady decline of landownership begins after that.

It is widely accepted that one of the primary ways to pass on generational wealth is through real estate.Â  In fact, a study by Brandeis University finds that among households whose wealth grew over a period of time, the number of years owning a home accounted for nearly 30% of the difference in the relative growth of wealth between white and black families.

“You’re talking about hundreds of millions of dollars,â€ says Stevenson. “These folks were situated on some of the most fertile real estate in America. The reason it’s called the Black BeltÂ  is because the soil was so fertile.Â  In addition, some of these places were convenient for commercial shipping and provided the possibilities of an agrarian economy that could support itself and create wealth,â€ he adds.

“If we’re serious about truth and reconciliation, we’ve got to begin by first telling the truth of what happened in the reign of terror that was taking place in the South during the period of lynching and the economic consequences,â€ says Stevenson. “Hopefully people will feel some need to reconcile themselves with history and do something responsive, even at a policy level to make restitution.â€

Restitution like that made to Jamaican slave owners because of the loss of wealth they would experience as a result of the end of slavery. One has to wonder if Prime Minister Cameron and his family would be where they are today if it weren’t for that kind of racism disguised as reparation.