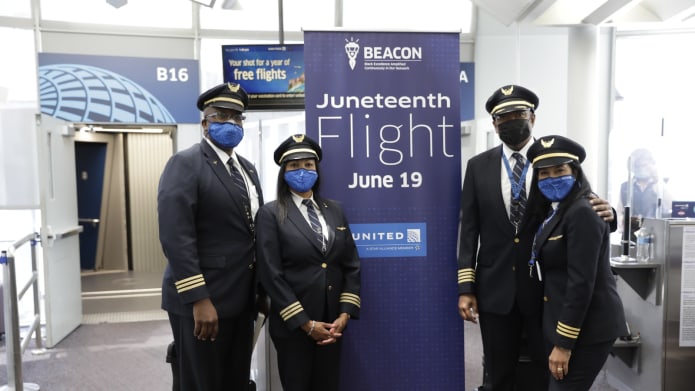 United Airlines Flight 1258 celebrated its Juneteenth in the sky with an all-Black flight staff.

Everyone from the pilot to the flight attendants and gate agents were Black, CNN reported. Water gallons were blasted out ahead of the flight to commemorate the special moment that came on the same day as Juneteenth.

Ahead of the flight, a celebration commenced that included a speech from Houston Mayor Sylvester Turner, a saxophone performance from one of the pilots, Sal Crocker, and water cannons blasted on the tarmac.

“Now, we’re soaring amongst the stars,” Turner told KTRK. “Let me tell you, for our ancestors, my parents, if they were still alive, they would just be amazed.”

United pilot Deon Byrne acknowledged how advances in racial and gender equality led to her being included among the small percentage of Black female pilots.

“Years ago, I was not able to fly in the capacity as a pilot,” Byrne said. “This is just amazing to represent a section of our culture.”

Studies show that only 2.47% of United States aircraft pilots and flight engineers are Black, according to Data USA.

“It is very difficult being a Black person, a Black woman, in the aviation industry,” Byrne said. “There’s not a lot of encouragement, and there’s absolutely mentorship for the future generation, but when I came in, it was very difficult to find the funding, the resources, and the connections to get started in the industry.”

After 25 years of working in the aviation industry, Byrne said Saturday was the first time she had ever flown with an all-Black staff.

“A lot of people say, ‘Oh, what’s the big deal, a bunch of Black people are just flying from here to there,’ but it is a big deal,” Byrne said. “In the aviation industry, people have always questioned if we were as safe or as competent. And we are careful. We’re very competent.”