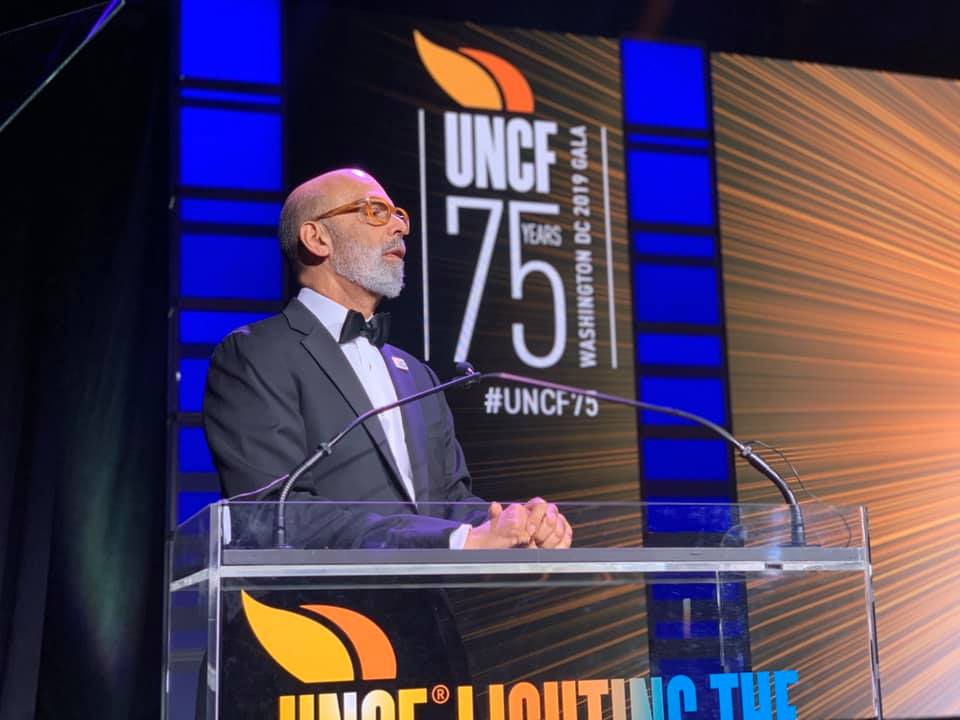 Everyone has their eyes on HBCUs right now. Especially after Beyoncé’s ode to historically black colleges and universities during her critically acclaimed Coachella performance and Homecoming documentary on Netflix.

But, for the past 75 years, the United Negro College Fund has been doing it for the culture and investing in black brilliance. In fact, they have helped nearly half a million students earn college degrees. In honor of 75 years of service, today UNCF is celebrating their anniversary with two events at its headquarters in Washington, DC.

Today, UNCF is set to kick off the organizations national one-day online Giving Campaign that will help 75 students in need of financial assistance receive the support they need to attend and graduate from an HBCU. In addition to the campaign, 37 students from Washington D.C., Maryland, and Virginia will be awarded scholarships to attend UNCF-member HBCUs.

We spoke with Dr. Michael Lucius Lomax, president and CEO of UNCF, about his “go forward” strategy; the vision for the organization’s future; and how people can invest in the future of HBCUs while momentum is at an all-time high.

Black Enterprise: With UNCF celebrating 75 years of excellence, what does your “go forward” strategy entail as the black community seeks to preserve the legacy of HBCUs?

UNCF is a laser-focused advocate for its 37 private HBCUs and is one of the nation’s most effective advocates for all HBCUs. Despite obstacles and barriers, assaults and attacks, under-investment and devaluation, HBCUs persist in the pursuit and execution of their mission.

HBCUs account for only 3% of the nation’s colleges and universities, and they enroll 10% of all African American undergraduates. Yet, they consistently punch above their weight, producing 17% of all bachelor’s degrees earned by African Americans. And they produce strong, impressive results and impact—educational, economic, and societal impacts for their students, the communities in which they are rooted, and for our nation. They remain true to their values and produce out-sized results, annually contributing $14.8 billion to the national economy; and, 134,090 jobs to their local and regional economies.

UNCF’s “go forward” strategy is centered around prioritizing the sustainability and transformation of the UNCF network of powerful HBCUs so that we can continue to produce the next generation of leaders.

Everyone has been infatuated with Beyoncé’s ode to HBCUs in her Homecoming documentary. What charge do you have for people to engage and support black academia given the national moment we’re living in?

Our anniversary is coming at a time when the current political and cultural turmoil has reignited many issues around diversity, inclusion, representation, and justice. Seeing some representation—but not inclusion—in many of our nation’s cultural and civic institutions, African Americans seem to be turning away from past integration efforts and are, instead, seeking out and re-investing in black spaces.

The recognition of higher education and the powerful impact it has on the black community has been at the forefront of this phenomenon, as we have seen the rise of Afro-centric P-12 education and a return to HBCUs. Prominent black Americans are more and more supporting and investing in these spaces.

As UNCF redoubles its commitment to support our member HBCUs and to education for all, we are issuing a charge to support academia by increasing investments in two of our nation’s greatest resources—HBCUs and our youth.

75 years from now, what impact do you wish for UNCF to have?

Throughout 75 years of service, UNCF’s core mission has remained the same. We’re proud to have helped cultivate some of the country’s most brilliant minds for decades, helping more than 450,000 students graduate from college since our founding and annually supporting more than 60,000 students across 1,100 colleges and awarding 10,000 scholarships to deserving students. UNCF has more than doubled the number of minorities attending college. Still, for every scholarship UNCF gives a student in need, we must turn away nine other applicants for lack of funding.

So 75 years from now UNCF seeks to have (1) doubled the number of students we have been able to get to and through college; (2) created generations of new leaders; and (3) secured a UNCF legislative and appropriations agenda that ensures all African American students will have equal education access.

To learn more about UNCF and invest in HBCU students through their campaign click here.