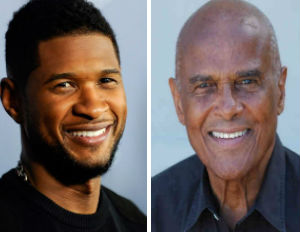 Entertainer Usher and legendary actor and activist Harry Belafonte sat down recently during an hour-long chat in New York City to discuss bridging the generation gap in activism, according to reports.

The conversation, held at the 92nd Street Y, was moderated by journalist by Soledad O’Brien, and centered around efforts today’s generations have made in driving change and what still needs to be done.

Usher, 37, called Belafonte, 88, a hero, mentor and father figure, while Belafonte acknowledged black celebrities like Usher, Jay Z, who was a member of the audience, and Common for “renewing a commitment to change after a ‘very me’ generation immediately following the civil rights era,â€ the Associated Press reports.

“I’m glad I lived long enough to see this emergence,â€ Belafonte added. His sentiments were opposite his earlier very vocal opinions on celebrity involvement in activism, when he said two years ago that Jay Z, BeyoncÃ© and other young black entertainers had “turned their back on social responsibility.”

“This conversation comes at a time when I think it’s a necessity for us as artists to use our platforms in a significant way,â€ said Usher, who recently released “Chains,â€ a song that speaks out against racism and police violence and features hip-hop artist Nas and singer Bibi Bourelly.

Belafonte, a major figure in U.S. and international civil and human rights activism for more than three decades, also educated the crowed at the event on the history of black resilience that goes back to slavery, in addition to labeling power of art as a way to slow “the rush to the bank.â€