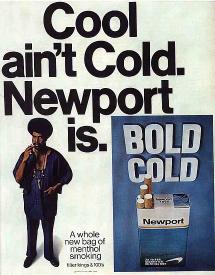 In the last month, shares of Lorillard (LO) have jumped nearly 10% on speculation that the cigarette manufacturer is a possible takeover target of larger tobacco company, Reynolds American Inc. (RAI). Â Analysts say Lorillard has a strong growth outlook due to the strength of its Newport cigarette brand, which Barron’s notes, “is popular with black and Hispanic smokers, particularly in the Northeast.â€

Some 93% of Lorillard’s revenues come from Newports. The company has the highest profit margins in the U.S. cigarette industry. I asked around, and friends who are smokers and ex-smokers say Newports are so popular among African Americans that the word “Newportâ€ is sometimes used among black smokers as a substitute for the word “cigaretteâ€–the way some people say, “Hand me a Kleenex,â€ when they mean “tissueâ€. In any case, Newport is the second-best-selling brand in the U.S. behind Phillip Morris’s Marlboro.

Even if Lorillard doesn’t get acquired, Barron’s claims Lorillard looks like a good investment. “Its shares trade at 11 times projected 2009 profit of $5.50 a share and provide a yield of 6%,â€ according to the financial weekly. “Lorillard pays out 70% to 75% of its profit in dividends. The company, which was spun off by Loews last year, has a great balance sheet, with more than $1 billion of cash at year end and no debt.â€ Barron’s concludes that Lorillard should be trading about 30% higher than it’s recent price of around $62.