Upward Bound Programs in Jeopardy Because of Minor Errors 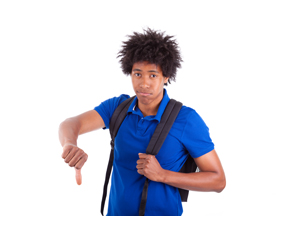 Upward Bound programs, which help to prepare low-income, underprepared students for college, are being shut out because the U.S. Department of Education is rejecting applications from the schools where the programs are situated.

Why are they being rejected?

In some instances, because the school failed to use double spacing throughout its application; in others, because the margins were off or the font was wrong.

Because of such niggling, technical oversights, Upward Bound programs, serving more than 2,000 students at 40 colleges, are in jeopardy. Schools and their supporters have appealed to Education Secretary Betsy DeVos, but, so far, to no avail.

Whose Side Are You On?

This is another striking example of undermining programs and supports that help low-income people, who are striving to help themselves.

In an earlier alarming move, the Education Department rescinded directives left over from the Obama administration that were in place to protect student loan borrowers. Student loan borrowers are vulnerable because they tend to be young and inexperienced. They need as many protections as they can get.

I asked the Education Department about DeVos’ actions, and was told that neither DeVos nor any other spokesperson was available to comment.

Here’s an excerpt from the Chronicle of Higher Education’sÂ article about the Education Department’s rejection of Upward Bound applications:

For the want of double spacing in a small section of a 65-page grant application, 109 low-income high school students will be cut off from a program at Wittenberg University that has been providing them with tutoring and counseling to prepare them for college. And they’re not alone. Over the past few weeksÂ at least 40 colleges and organizationsÂ with similarÂ Upward Bound programsÂ have also had their grant applications summarily rejected by the U.S. Department of Education for running afoul of rules on mandatory double-spacing, use of the wrong font, or other minor technical glitches.

The affected colleges, whose programs serve at least 2,400 low-income students, and the members of Congress who represent them are furious, especially because their appeals to the department for reconsideration have so far been met with little sympathy or indication of any sort of resolution.

The program director for Upward Bound at Wittenberg, Eddie L. Chambers, said he did have a conversation with Linda Byrd-Johnson, acting deputy assistant secretary for higher education programs. It was “gracious,â€ said Chambers, who has overseen the Wittenberg program for 40 of its 50 years. “But in the end, she told me, ‘A rule is a rule.’ She told me, ‘Eddie, I too have to abide by the rules.’â€

For more, visit the Chronicle of Higher EducationÂ website.

School Loan Payments Got You Down?

Jackie Robinson Museum to Open in New York City in 2019

FacebookTwitterYoutube
← School Loan Payments Got You Down? ← Jackie Robinson Museum to Open in New York City in 2019
×
'