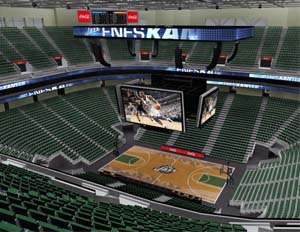 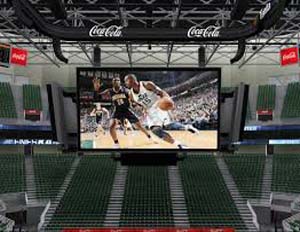 At the conclusion of the 2012-2013 NBA season, once again, the Utah Jazz came short of making the playoffs. In a competitive race for the 8th seed against the Houston Rockets, the Utah Jazz fell behind by two games. The fact that the organization didn’t meet their goal of making the playoffs to ultimately win a championship was obviously a disappointment for the team; but the team did reach an off-season goal.

According to ESPN, Owners of EnergySolutions Arena are upgrading the home turf with a new $15 million scoreboard system.

After the completion of the scoreboard, it will consist of four high-definition screens in the center of the arena that will coincide with the court’s sidelines and baselines making for great visuals for all the fans. The scoreboard as a whole will weigh about 55,000 pounds.Â  The screens used for the new installment of the scoreboard will use new LED light rings and screens for better visuals and sound than ever before. The last installment of a new scoreboard was over a decade ago.

The new and improved scoreboard is scheduled to be completed by October, before the 2013-2014 NBA season.