In the News: Venus Pulls Out of Open; Beyonce's Baby Bump Sets Twitter Record and More 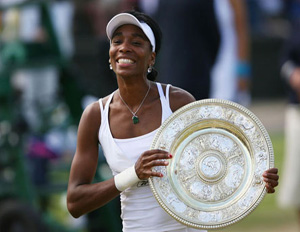 Two-time U.S. Open champion Venus Williams announced her withdrawal from the tournament Wednesday after being diagnosed with Sjogren’s syndrome, a rare autoimmune disease in which the body attacks its own healthy tissues.

Williams, 31, has experienced symptoms associated with the disease for years, she told Good Morning America’s Elizabeth Vargas. Symptoms vary, but range from dryness in the eyes and mouth to fatigue and joint inflammation.

The tennis star says she’s disappointed she had to pull out, but plans to return to the game. “I enjoyed playing my first match here and wish I could continue, but right now I am unable to.Â  I am thankful I finally have a diagnosis and am now focused on getting better and returning to the court soon.â€

Beyonce helped push Twitter to a new record in terms of Tweets per second yesterday evening when the pop singer announced her pregnancy at the MTV Video Music Awards. According to Twitter, Beyonce’s big MTV #VMA moment gave Twitter a record bump: 8,868 Tweets per second.

Washington is among eight big-city metropolitan regions in which minorities became a majority in the past decade, according to a new analysis of census data showing White population declines in many of the largest metro areas.

Along with Washington, the regions surrounding New York, San Diego, Las Vegas and Memphis have become majority-minority since 2000. Non-Hispanic Whites are a minority in 22 of the country’s 100-biggest urban areas.