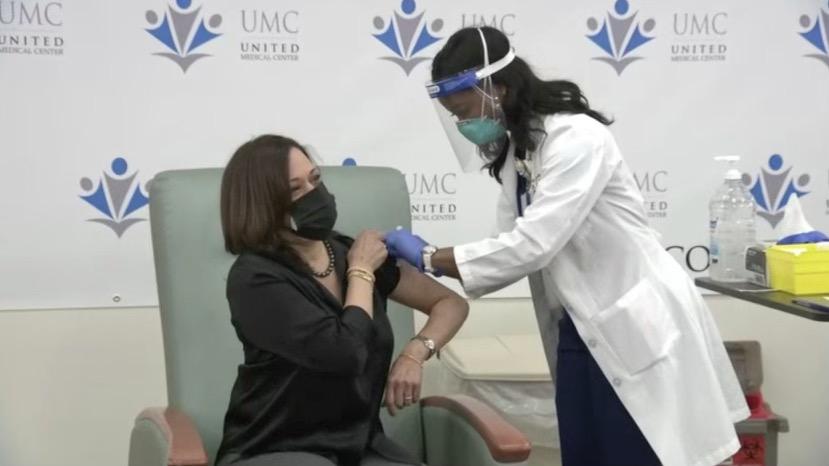 The first woman to be elected to the country’s second highest post received the shot on live TV in an effort to get more Americans, especially Black Americans, to take the vaccine.

“That was easy,” Harris said after receiving the shot in her left arm. “Thank you. I barely felt it. I want to encourage everyone to get the vaccine. It is relatively painless. It happens really quickly. It is safe,” Harris added.
Harris added the second gentleman Doug Emhoff would also receive the first dose of the vaccine Tuesday. She said Americans can take solace in the fact that the vaccine will be given by medical officials that live in your community and that you might already know and trust.
“I want to remind people that right in your community is where you can take the vaccine, where you will receive the vaccine, by folks you may know, folks who are otherwise working in the same hospital where your children were born. Folks who are working in the same hospital where an elderly relative received the kind of care that they needed,” Harris said after receiving the shot.
President-elect Joe Biden received his first dose of the vaccine last week and other Democratic lawmakers including Speaker of the House Nancy Pelosi, Senate Minority Speaker Chuck Schumer and Majority Whip Jim Clyburn and Alexandria Ocasio Cortez also received the first dose of the vaccine.
Biden and Harris’s shot were given a week apart in case either of them experience side effects of the vaccine, it wouldn’t occur on the same day.
The Food and Drug Administration has approved emergency authorization for two coronavirus vaccines in the country,  Pfizer/BioNTech and Moderna. Both showed efficacy rates above 90%.
Just over two million Americans have received the coronavirus vaccine, according to the New York Times. Last week, Pfizer announced they have millions of additional doses ready to be delivered to states, once the government asks for them. That prompted states to announce vaccine allocations for the next few weeks have been cut.