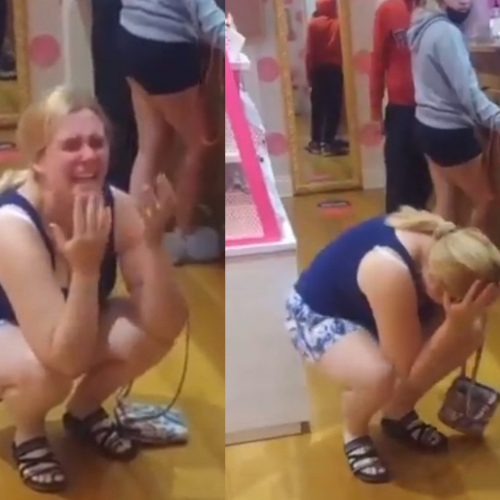 A white woman acted like a victim when in fact she was an aggressor towards a Black woman at a Victoria’s Secret location in New Jersey.

Abigail Elphick, now widely known as “Victoria’s Secret Karen” has gone viral after she pretended to be an injured victim, calling the authorities on a Black woman named Ijeoma Ukenta, 38, of Newark, NJ.com reported.

Elphick tried to hit Ukenta on camera, but somehow her attack missed Ukenta.

Unfortunately for Elphick, Ukenta’s recorded evidence speaks for itself.

It is not clear what exactly started the incident but Ukenta, who is Muslim, said Elphick followed around the store.

“Oh my God. Oh my God. Do you see this? Oh my God. I never thought nothing like this would happen to me. She tried to run and hit,” Ukenta said on camera as Elphick charged her.

After her failed assailant was captured on camera, Elphick curled up into a ball and began to cry crocodile tears, saying, “No I didn’t. I don’t want to be recorded.”

“Why aren’t you guys defending me? I just don’t want to be recorded,” the Karen added, “Don’t record my mental breakdown please. Please, please, please.”

In response to her sudden attitude, Ukenta calmly responded back saying, “You keep lying saying I’m threatening you so I’m recording to protect myself.”

Ukenta uploaded the video on TikTok and YouTube, however, she tweeted she got “banned off Tik Tok.”

I was banned off Tik Tok however everyone else was allowed to tell my story. I’m traumatized 😫😪😔

In a second recording, Elphick can be seen with her face on the ground, kicking and screaming that she is being harassed by Ukenta.

Ukenta can be heard on camera saying that she was more concern with Elphick’s call to the police than her panic attack.

When police arrived, the two women were taken to the police station.

No one was charged for the incident, but Ukenta, seeking justice, launched a GoFundMe page that has raised more than $72,000 as of reporting.

Elphick told police that she worried that Ukenta’s videos would jeopardize her preschool teaching career and demanded the videos be deleted.

Elphick wrote in a short biography explaining she was “diagnosed with chronic constipation and Pelvic Floor Dysfunction,” but it does not mention any mental disorders.

Some records show she was employed between Cedar Grove and Newark, New Jersey, but Cedar Grove School District is denying it, writing on its home page, “The individual involved at the Mall at Short Hills that took place on July 11, 2021 is not and has never been employed by the Cedar Grove Board of Education.”