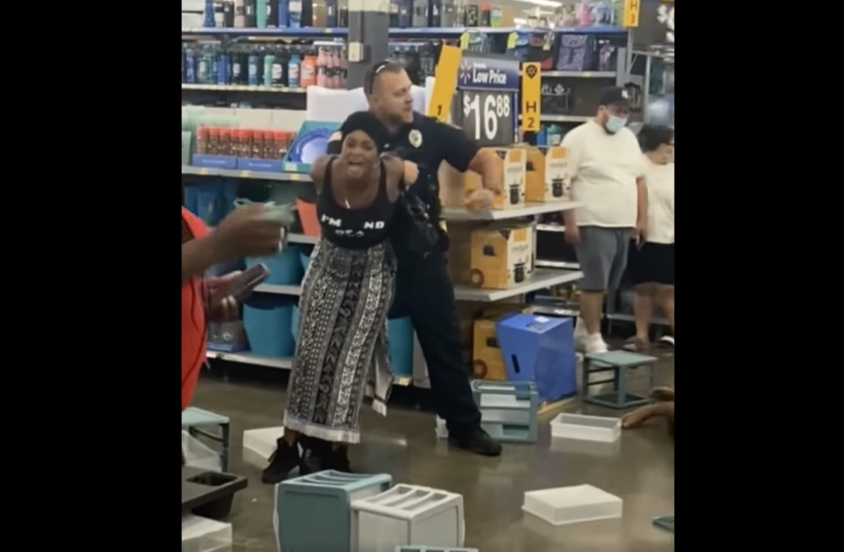 A police officer from upstate New York has been placed on paid leave after camera footage showed the man punching a handcuffed Black woman in the throat during an arrest at a Walmart.

On July 4, Officer Rory Spain of Dewitt, New York, assaulted Tyreana Edmonds as she allegedly tried to protect her pregnant sister, Tajenik Byrd, that Officer Corey Buyck manhandled. Police had been called to the retailer after a group of people allegedly participated in a melee inside the store.

Byrd is accused of pepper-spraying Walmart employees and others inside the retail location. According to the bodycam footage, the fight which prompted the call to cops lasted for a mere 30 seconds. The fallout that ensued was much longer.

As Spain approached Edmonds, the woman was arguing with a white customer. The cop grabbed the upset woman from behind to detain her. In the video, Spain never asked what happened.

The reportedly pregnant sister tried to pull Edmonds away, and the situation escalated from there. Edmonds attempted to explain what happened, but Spain disregarded what the woman said. She even warned the officers that her sister was pregnant, and their nonchalance appeared to rile the woman up even more.

“Get off my sister,” Byrd said.

“Leave him,” Edmonds said, trying to calm her sister down. “Let him cuff me.”

“They tried to charge my sister,” Edmonds said to an unidentified woman. “They jumped my sister two days ago. My sister’s a month pregnant.”

Buyck flung Byrd to the ground and sat on her as he put her in cuffs.

Walmart employees tried to evacuate the store, but patrons quickly pulled out their cellphones to record and defend the woman.

Spain even pulled his taser on a young man who called out his aggressive behavior.

As the wayward cop continued trying to detain Edmonds, she struggled. He eventually dragged her partially on the floor. When she tried to bite him, Spain coldcocked the woman in the throat. She fell to the floor.

This in Syracuse Ny …. Twitter do ya thing .. pic.twitter.com/TpjYwJjrZr

The Dewitt Pollice Department posted a 15-minute awkwardly-narrated video to its Facebook page.

Department Spokesman Lt. Jerry Pace said, “Conclusions about whether the actions of the officers are consistent with department policy and the law will not be made until all facts are known, and the investigation is complete.”

On Friday evening, roughly two dozen protesters showed up outside of the DeWitt Pollice Department.

Byrd was charged with third-degree assault, endangering the welfare of a child, resisting arrest, possession of a  noxious material, and fourth-degree criminal possession of a weapon.

The women were released and ordered to make desk appearances.