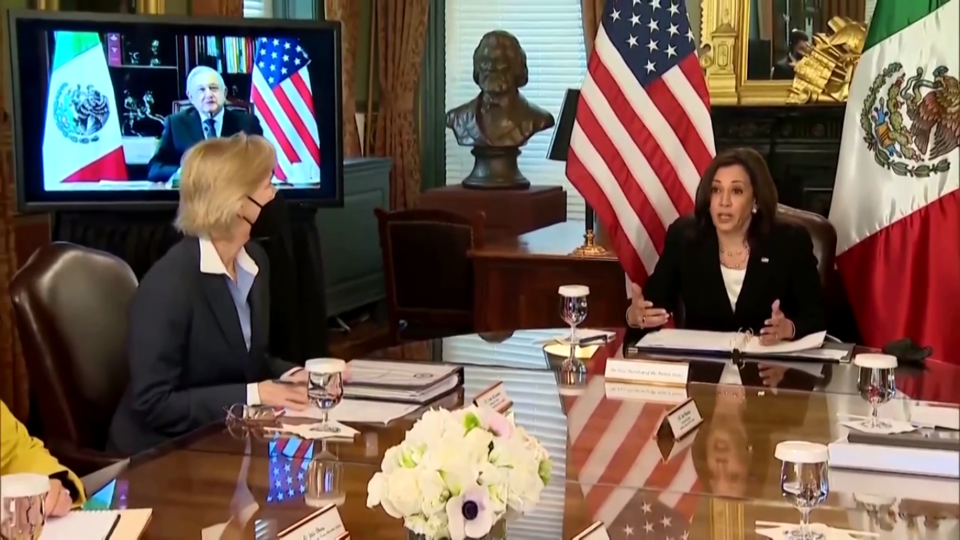 (Reuters) -The United States must fight corruption in Central America and help its economies in order to stem migration, Vice President Kamala Harris said on Friday in a call with Mexico’s president who pitched a tree-planting-for-visas plan.

The Biden administration has made the rule of law, judicial independence and combating corruption prominent elements of its strategy to improve conditions and lower migration from Central America and is keen to engage Mexico as a partner.

“Together, we must fight violence, we must fight corruption and impunity,” Harris said, at the start of call with Lopez Obrador prior to a June 7-8 visit to Guatemala and Mexico, her first foreign trip as vice president.

President Joe Biden has tasked Harris with leading U.S. efforts to lower immigration from Mexico and Central America as the administration grapples with an increase in people crossing at its southern border.

Harris said the rising numbers of migrants were a serious challenge for the two countries and they should provide immediate relief in El Salvador, Guatemala and Honduras.

In a statement after the meeting, the vice president’s office said Mexico and the United States will work together in Central America to tackle unemployment, limited market access and deforestation and instability caused by climate change.

Hundreds of thousands of people from the three Central American nations, known as the Northern Triangle, have left since last year, traveling to and through Mexico following economic damage from the pandemic and hurricanes.

“Most people don’t want to leave home and when they do it is often because they are fleeing some harm or they are forced to leave because there are no opportunities,” Harris, 56, said.

Harris recently unveiled $310 million in additional aid for the region, which has been badly hit by the pandemic and storms that devastated parts of Honduras and Guatemala last year.

Lopez Obrador, 67, said he had a specific proposal he wanted to discuss with Harris. He did not give details, but told reporters earlier that the tree planting idea was at the top of his mind.

“We agree with the migration policies you are developing and we are going to help, you can count on us,” he said.

Mexico’s government has launched a large jobs program that pays small farmers to reforest land, and has recently expanded it to Central America. At a Washington climate summit in April, Lopez Obrador raised the idea that the United States could reward farmers with work visas and citizenship.

U.S. officials have so far given no indication that such a proposal could become policy.

Lopez Obrador rose to prominence criticizing corruption in past governments and considers the issue central to his legacy.

However, shortly before Friday’s call his government made a formal diplomatic complaint to the United States for financially supporting an anti-graft group he considers to be politically opposed to the government.

Lopez Obrador said the issue would not be raised in the meeting with Harris. He also said he would not stay for the entire call.

Lopez Obrador, who touted his good relations with both the previous Trump administration and the Biden administration, has taken a harder line with Washington on a range of issues in recent months.

Asked what Harris hoped to accomplish in the talks and what agreements were expected, Ricardo Zuniga, the U.S. special envoy on Central America’s Northern Triangle countries, said on Wednesday the discussions would go beyond immigration.

“We’re undertaking these kinds of engagements with the view of the totality of our relationship with Mexico in mind,” Zuniga said. “Mexico is our largest trading partner… We’re deeply connected to them through economics and, through… our value chain and production chains.”