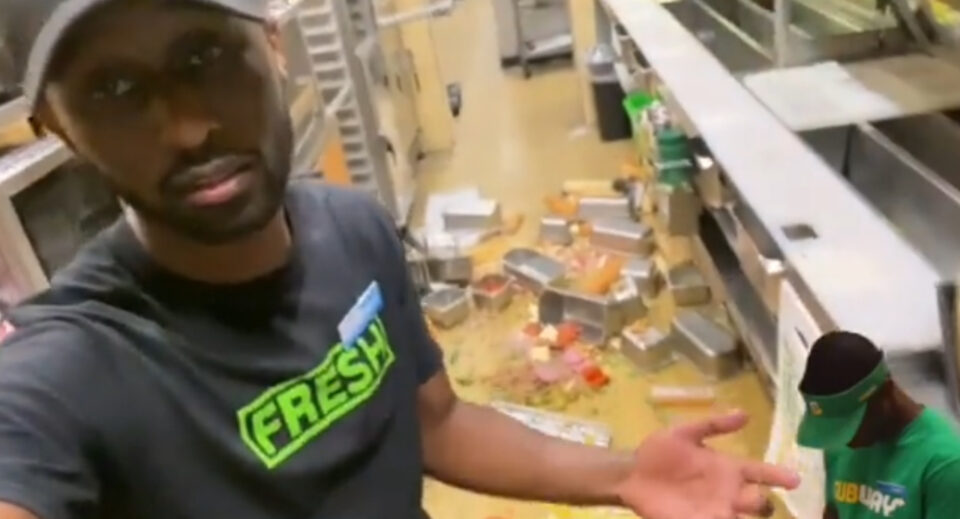 There have been many instances of people being discovered in nontraditional ways in the hip-hop world, but one aspiring rapper just took the cake!

According to XXL, earlier this month a Subway employee thought it was a good idea to record himself trashing the fast-food restaurant where he worked to get the attention of rapper and prison reform activist Meek Mill.

As he destroys the place of business, he made sure to film his actions and encourage others to contact Meek Mill. He also tagged the Philly rapper in the video that went viral.

Jumanne Way, whose Twitter handle is @JumanneWay posted the video clip of himself on the social media platform on Oct. 4, where he is seen throwing loaves of baked bread to the floor while loudly expressing that he is trying to get signed to Meek Mill’s label, DreamChasers.

Apparently, this attempt at getting the rapper to notice him was his way of telling everyone that he is sick of making a living at the fast-food establishment.

He continues to record himself making a complete mess of the place as he throws lettuce on the floor, condiments, and whatever he can get his hands on. He also says in the camera, “It’s either this or I have to be in the streets!”

Oddly enough, in a video posted to Twitter several days later, on Oct. 8, he states that he now has to clean up all the mess he has made and asks anyone who is able to help put him in a better position to do so—still saying that he is trying to reach out to Meek Mill.

“I gotta clean all this up,” he adds. “This is the aftermath. I’m trying to reach out to Meek. Like I said, or anybody that’s in a position to help put me in a better position. This right here, bro, this is like…I don’t think y’all know how much I had to go through to get to this point, that this became acceptable to me.”

As one can imagine, Subway was not happy with Way’s actions or the recording. The fast-food chain released a statement to Newsweek, stating that he was fired for his behavior.

“Subway and our network of franchisees take health and food safety extremely seriously and don’t condone any behavior that violates our strict policies in these areas.”