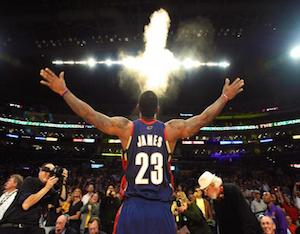 Nike has blown up news feeds around the globe after re-signing Kevin Durant to a major deal. Now, to double down on the hoopla, the Swoosh is reminding all that LeBron James will be dropping a new shoe this year with a worldwide unveiling next week.

On September 16th, hoop fans and sneaker heads will be able to finally see the Nike LeBron 12, the latest pair of kicks from Akron’s own two-time NBA champion. There have been a few pictures that leaked online from those blessed enough to get an exclusive pair before the official images are released. Without spoiling the event, we do have the very imaginative trailer courtesy of Nike for your perusal. Check it out below: