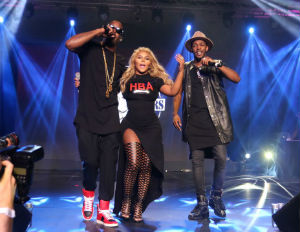 On aÂ person’s best asset for making moves in the entertainment industry:
“You have to have a game-plan. I sit down with a pad and pen. I play music and jot down everything in my head and then I organize it. Then I take the dream out of it and become a realist and then figure out how I am going to do it. Â You have to understand what it’s going to take to be the greatest. You don’t have time to play, so let’s go.”

One piece of advice you would give your younger self:
“Not [to] get so caught up in the industry, success and fame. Sometimes I’ve gotten off track. I can make money, but I can’t make time. I missed time with my kids and my mother. The most important thing that matters to me is my family and relationship with God.”

Each night, attendees also enjoyed exclusive evening concerts by Puff Daddy & the Family, Lil Kim, Lil Wayne, French Montana, Los, Christian Combs, and Busta Rhymes. Diddy performed his new song Workin, as well as classic hits with his friends along with performances by Jidenna, Dej Loaf, Travis Scott, and Post Malone. The concert was followed by the exclusive Apple Yacht Party, which featured special performances from Rick Ross and Nas on board the SeaFair Miami.

In case you missed it, here’s a video of #ASKDIDDY Â and the content creators panel: