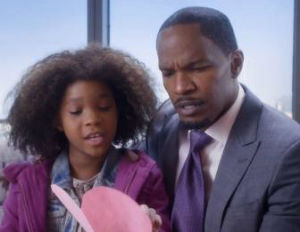 QuvenzhanÃ© Wallis is heading for the big time and all you’d need to recognize that is look at the who’s who list of producers presiding over ‘ANNIE,’ by Sony Pictures, in which she stars.

“Annie will be released during the winter holiday season in 2014. The film is being directed by Gluck and produced by James Lassiter, Jada Pinkett Smith, and Will Smith through Overbrook Entertainment, and by Shawn “JAY Z” Carter, Jay Brown, and Tyran “Ty Ty” Smith through Marcy Media. Gluck is currently revising the film’s screenplay, which was written by Emma Thompson and rewritten by Aline Brosh McKenna based on the musical stage play “Annie,” book by Thomas Meehan, music by Charles Strouse, lyrics by Martin Charnin, and on “Little Orphan Annie,” Â© and Â® Tribune Media Services, Inc. The film is being overseen at the studio by Andrea Giannetti and Devon Franklin.”

There’s been more than a few naysayers about a black actress playing the role of Annie, but early returns say Ms. Wallis — who has an Oscar nomination for her role in Beasts of the Southern Wild — more than holds her own.

Are You Serving Your Traditions or Your Mission?

Black Trucking Magnate Discusses Move into Industry and his Success

FacebookTwitterYoutube
← Are You Serving Your Traditions or Your Mission? ← Black Trucking Magnate Discusses Move into Industry and his Success
×
'