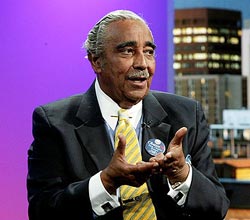 I enter Congressman Charles Rangel’s suite of offices, housed on the 7th floor of the Harlem state office building named after the late, legendary politician Adam Clayton Powell, Jr.Â  The 12-foot stainless steel statue of Powell’s likeness–complete with the defiant, purposefulÂ  stride–can be found on the plaza below, linking America’s premiere Black Hamlet’s past with its present. Inside the office is a buzz of activity as aides field calls, make appointments, and handle the concerns of an occasional walk-in constituent–one being an elderly man who wants to know about his housing status in between interludes of Nat King Cole tunes.

Rangel, who unseated Powell in 1970, has spent the past four decades dealing with eight presidential administrations, a battery of political challenges, countless partisan victories, and a scandal or two as this district’s perennial representative. I am in the office to conduct my first on-camera interview for our Black Enterprise Business Report television show with the Chairman of the House Ways and Means Committee, one of the nation’s most powerful legislators. The interview focuses on—what else?—President Obama’s massive, unprecedented economic agenda. The meeting falls on the day after U.S. Navy snipers rescued a lifeboat captain from Somali pirates—making Obama reportedly the first commander-in-chief who has had to deal with pirates since Thomas Jefferson—and the day in which the president announced that his administration has approved the two-thousandth local infrastructure project since the signing of the American Recovery and Reinvestment Act more than six weeks ago.

As our field producer Kenneth Meeks, a student of politics in his own right, finishes handling the logistics, I meet the raspy-voiced powerbroker—the second time I’ve had a chance to conduct a face-to-face Q&A session since he gained control of Ways and Means two years ago. As we shake hands, Rangel flashes his smile, beaming over the new political era he never fathomed he’d participate in. Of course, he relishes it even more that Democrats control the White House and two houses of Congress.

Last year, when he went along with the $700 billion bailout plan, now known as the Troubled Asset Relief Program (TARP), Rangel admits “he was scared to death like everyone else.” But the measure, he asserts, was necessary to provide stability to a fragile financial system. He supported the administration’s mammoth $787 billion stimulus package that was to help “stop the painâ€ through, among other items, unemployment relief and preservation of public sector jobs. But he was most excited on April 2, when he voted along with his Democratic colleagues for the $3.55 trillion budget package that closely followed Obama’s “blueprint for America,â€ a plan calling for the overhaul of the infrastructure and instruction within America’s schools, reformation of the costly octopus of a healthcare system, and initiation of the green economy over the next decade. He likens it to being a part of FDR’s new deal. “Every generation has to go through something like thisâ€ he gushed at the beginning of the interview. “It’s righting the course of America.â€

My response: “Well, Rahm Emanuel [Obama’s Chief of Staff] has been quoted as saying, ‘You shouldn’t let a crisis go to waste.’ â€

“I wouldn’t characterize the situation that way.â€