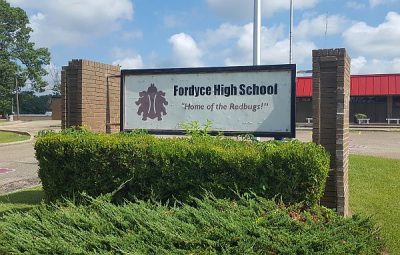 A disturbing cell phone video of a fight between two Arkansas high school students is sparking a statewide discussion about bullying and unfair treatment from school administration.

The incident occurred at Fordyce High School between a Black student and a white student. In the widely-circulated footage, the Black student was seen getting punched, placed in a chokehold, and thrown to the ground after falling unconscious. In what appeared to be a school locker room, the white student continued to kick the victim in his back while he was down.

Fox 16 reported that both students were dealt a suspension for the same amount of time. The ruling prompted other high schoolers to protest the issue of bullying by organizing sit-ins in the high school hallways. They claimed the victim had come forward with previous reports of  being bullied.

“The same amount of punishment, like, that’s not right,” Enough Smith, an alumnus of the school who graduated in 2021, told Fox 16. “You can clearly see in the video that he didn’t want to fight the guy, and the guy still was picking on him, throwing shoes on him.”

According to the news outlet, the school district has reportedly given the white student a “modified expulsion.” But there have been no comments made on the Black student’s current status.

“This video came to light about two days ago and we can’t discuss student discipline because that is confidential information, Fordyce School District Superintendent Dr. Judy Hubbell told the Camden News earlier this month.

“We are in the process of investigating this case and taking care of it,” she added. “We don’t want bullying on our campus. We want to have a safe campus, but this just came to light and we are working on this, we are talking through the process.”

In response to the incident, the Arkansas Martin Luther King  Jr. Commission will be hosting a workshop for students to discuss bullying.