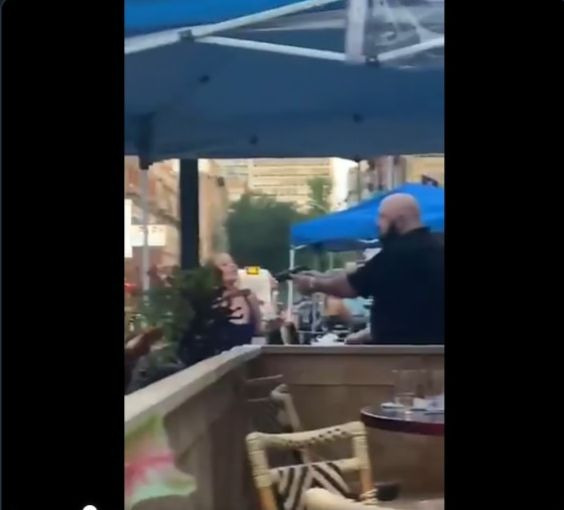 A White Philadelphia bar owner was caught on video pulling a gun on a Black man yelling at people for not wearing a face mask at a restaurant, according to NewsOne.

The video clip, which was shared on social media, shows Jamie Atlig pointing a gun at an unknown Black man who was chastising customers at Nick’s Roast Beef for not wearing face masks on South Second Street over the weekend.

My intern, @Dj__Torney, just shared this upsetting story with me.

After a weekend of too much gun violence, more guns is not the answer.

We need more solutions before we have more problems! #EnoughIsEnough https://t.co/rHL0yIOcyA

Atlig, who drew his weapon and pointed it toward the unnamed Black man, owns a bar named Infusion Lounge. Through an attorney, Atliq stated that he pulled his gun because he was being threatened.

“Mr. Atlig is licensed to carry a firearm. He has extensive firearm training. He’s a business owner and he was being threatened,” criminal defense attorney Robert Gamburg said. “The individual reached behind his back for an object, Mr. Atlig unholstered his licensed firearm, defused the situation, and sat back down.”

The woman, who got between the Black man and Atlig, defended the action of the Black bike rider.

“The Black man doesn’t need to be killed for this to be a story,” Liz Krieger said. “A man had a gun pulled on him for speaking the truth. We weren’t social distancing. He was completely in the right to be yelling at us—and if I hadn’t been there, this is how Black people are shot, and it’s claimed later that he had a bike lock on him and people thought it was a gun. But let’s be clear: The bike lock was never pulled out [until after the gun was].”

We are actively investigating this incident. If you were a witness, or have any information, please contact Central Detectives at 215-686-3093. You can also report information anonymously at 215-686-TIPS, or on our website – https://t.co/ZgOrozPRov https://t.co/z9jwH6dKIN