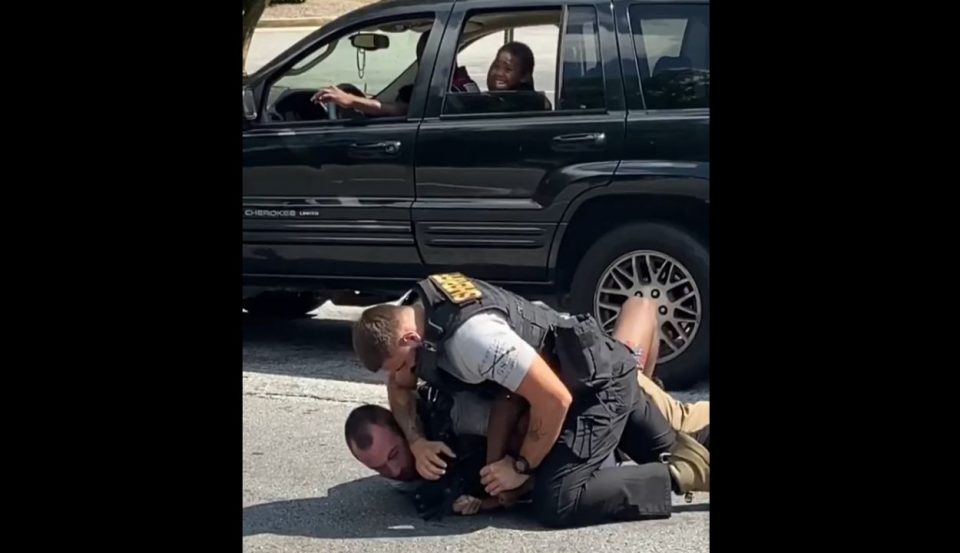 An unarmed Black man from Georgia was caught on video being pummeled by white police officers late last week. The confrontation began because the Black man didn’t have identification. One of the officers seen on the video has been fired, according to NewsOne.

The victim was identified as Roderick Walker. The vehicle he was riding in was stopped by police officers from the Clayton County Sheriff’s office last Friday because of a broken taillight. After asking for Walker’s ID, he stated he didn’t have any and the interaction quickly escalated.

The beating took place in front of Walker’s children. As with most incidents dealing with law enforcement and their misdeeds, the incident was filmed by multiple bystanders. From the viewing of videos, a helpless Walker was beaten and choked to the point that he said, “I’m gonna die!” and “I can’t breathe!”

After immediately suspending the officer and promising an investigation of what took place, the sheriff, who was not named, was terminated from his job, according to a statement by the Clayton County Sheriff’s Office, GA.

“The Deputy who repeatedly struck Roderick Walker is being terminated from the Clayton County Sheriff’s Office by order of Sheriff Victor Hill for excessive use of force. This is the administrative action. The criminal investigation of this matter will be turned over to the Clayton County District Attorney’s Office.

“The Sheriff ordered a signature bond courtesy for Mr. Walker 48 hours ago. Unfortunately, Mr. Walker has a felony probation warrant out of Fulton County for Cruelty to Children, Possession of a Firearm by a Convicted Felon, and a Failure to Appear warrant out of Hapeville which resulted in Magistrate Court denying him a bond. Mr. Walker’s legal counsel will have to resolve these issues to secure his release.

“Mr. Walker has received medical treatment to include x-rays (no fractures detected) of his head and is being monitored at the jail hospital by a doctor.”