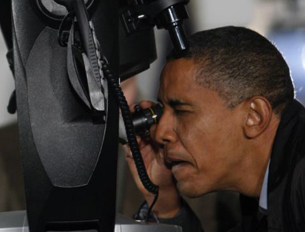 On October 19, President Obama hosted the second White House Astronomy Night to highlight the importance of inspiring more boys and girls with the wonder of science and space.

Astronomy Night brought together students, teachers, astronomers, engineers, scientists, space enthusiasts and even former astronauts, for an evening of stargazing. Mae Jemison, the first African American woman in space, was there, as was Bill Nye the Science Guy; the Mythbusters; and Charlie Bolden, the head of NASA.

President Obama viewed the moon through a telescope with the aid of a high school senior from Brooklyn International High School, Sophy Alvarez.

As part of Astronomy Night, the president also announced new private-sector commitments to further his Educate to Innovate campaign to inspire and prepare more girls and boys — especially those from groups historically underrepresented in science, technology, engineering, and mathematics–to excel in STEM fields. The announcements included, among others:

The 2015 White House Astronomy Night allowed students, teachers, astronomers, engineers, scientists, and space enthusiasts of all ages the opportunity to stargaze from the South Lawn of the White House.

Participants also engaged in hands-on science activities, including building model miniature satellites, peering at the planets and stars with different telescopes, and exploring samples of rocks from the moon, Mars, and meteorites. Guests also met astronauts and leading science communicators, and interacted first-hand with presentations on cutting-edge space technologies. Additional information on the activities and exhibits at Astronomy Night can be found here.

In conjunction with White House Astronomy Night, schools, museums, National Parks and other institutions from more than 35 states organized Â their own astronomy nights across the country, in more than 80 separate events. In locations as diverse as Baltimore; Twin Falls, Idaho; Â Grand Canyon National Park; San Juan, Puerto Rico; and even a school on a NATO base in Europe, people Â shared the excitement of astronomy and explored the universe visible in their own backyards.

White House Astronomy Night is just the latest in a series of events that President Obama has hosted over the years to inspire students to pursue STEM education, and to increase opportunities for all Americans to develop careers in science, technology, and innovation-driven disciplines.