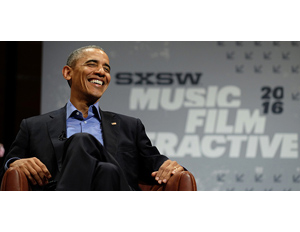 Inspired by the annual Austin-based film, music, and technology festival South by Southwest (SXSW), the White House announced its own version of the event, South by South Lawn (SXSL).

According to a press release from the chief digital officer of the White House, SXSL “will bring together creators, innovators, and organizers who work day in and day out to improve the lives of their fellow Americans and people around the world.â€

The effort is in coordination with the American Film Institute (AFI), and the President’s Committee on Arts and Humanities (PCAH).

SXSL, like SXSW with have an interactive, film, and music components. The interaction portion of the festival will comprise of panel discussions and booths featuring technology and innovative projects.

Interactive panelists will consist of influencers who use their various platforms to effect positive change.

The film part will feature submissions from the 3rd Annual White House Student Film Festival. Students from grades K-12 submitted over 700 short films based on the theme, “The World I Want to Live In.â€

The music portion of SXSL will highlight both well-known and up-and-coming artists who use their music as a source of inspiration.

Submissions are now being accepted for attendees who are creating change in their communities. Submission deadline is Sept. 10Â at 5 PM.

SXSL will begin Oct. 3. At SXSW in March of this year, President Obama kicked off the festival with a keynoteÂ about the impact of technology.

“It is critical, all of you who are shaping this environment, are spending time thinking about how we are getting citizens engaged,â€ he said to the audience made up of influencers in the tech industry.

President Obama’s administration has been particularly technology-focused. During his keynote, he cited a number of government initiatives for advancing technology and internet access, particularly in poor urban and rural communities. These include ConnectEd, an effort to ensure that 99% of American students will have access to next-generation broadband by 2018. Opportunity Networks is another one of his initiatives to deliver internet access into public housing, and rural, lower-income communities.