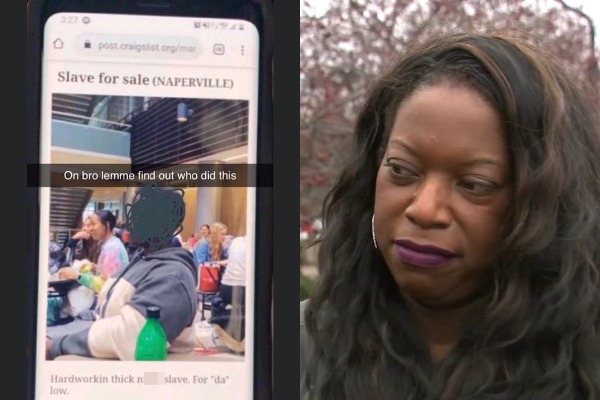 The white high school student who attempted to sell his Black friend as a slave on Craigslist two years ago, has been sentenced.

The Naperville Central High School student was sentenced to two years of probation and 100 hours of community service after pleading guilty on Sept. 1 to felony hate crime charges and one count of misdemeanor disorderly conduct, the Daily Herald reports.

On Nov. 14, 2019, the white student, then a 14-year-old freshman, took a photo of his Black classmate and created a Craigslist ad reading “Slave for sale (Naperville),” followed by a racial slur.

Naperville police conducted an investigation while the white student was given an in-school suspension. Once he was identified, the student was taken into police custody.

“Hate crimes have no place in a civilized society and will not be tolerated, regardless of the accused’s age,” DuPage County State’s Attorney Robert Berlin said. “Studies show that the victims of hate crimes can suffer from depression, increased anxiety, low self-esteem and insecurity among other things.”

“Everyone deserves the right to feel safe and welcome in our communities, and my office will continue to charge and prosecute anyone, regardless of age, who engages in this type of behavior.”

The boy is also required to undergo individual and family counseling and must submit a DNA sample to the State of Illinois, CBS Chicago reports.

At the time of the targeted attack, the mother of the Black student told the Naperville Sun that the two students were once close friends and her son was taunted in school after the racist ad was posted.

Tamara Wallace recalled her son walking through the halls at school and being told “I’ll buy you for a dollar.”

“He didn’t know what was going on,” Wallace said. “He was the butt of jokes for days.”

The defense attorney for the white student who was charged claimed that a formal apology would be made, the Associated Press reports.