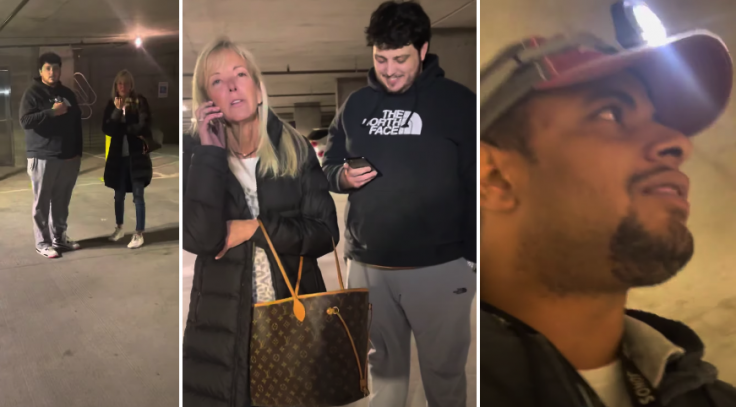 A new viral video shows a Black parking lot employee being harassed by a white woman and her son at an apartment building in Nashville.

Johnny Martinez said he was just doing his job—checking for car permits at the River House Apartments— when the seemingly racist “Karen” approached him along with her son. Martinez and her son questioned Martinez about what he was doing as he surveyed the area doing routine work.

“While performing a routine parking permit audit on the premises for my employer the duo confronted me at a nearby elevator,” his YouTube caption read. “The first words that came out of the Karen’s mouth were ‘you don’t belong here, how did you get in here.'”

The Karen can be seen asking Martinez what he’s doing and why he’s in the parking lot. He tells the prying woman that it’s none of her business. The mother and son then tell Martinez that he doesn’t live in the building and that they were calling the police.

“You wanna call the cops?” Martinez asks the woman’s son. “Yeah,” he replies. “This is not your apartment.”

The son then asks Martinez if he has any identification. Martinez says he doesn’t have to identify himself to either of them. In the caption of the video, Martinez explained how he was wearing his name badge around his neck throughout the entire encounter.

“They knew what I was doing and just wanted to demean me by telling me I didn’t belong and trying to force me to show them ID,” he wrote.

At one point, Martinez says the son tried to smack his phone out of his hand.

“Dude seriously? You’re attacking me,” Martinez can be heard saying. The white woman then pulls out her phone to call the police. Martinez tells her that he wants her to call the police because he plans to press charges on her son for “attacking” him.

“There’s some gentleman down here, we asked him what he was doing down here and he said it’s none of our business,” the woman says over the phone. “He’s kind of gotten nasty toward us so we kind of are trying to figure out why this person is in the parking deck and he will not tell us why he’s here, says none of our business.”

Martinez detailed how he waited for the police after the encounter and filed a police report. He also plans to file charges with the district attorney this month, Newsweek reported.

“The Karen had also called the police and conveniently left out the fact her son assaulted me,” he noted.