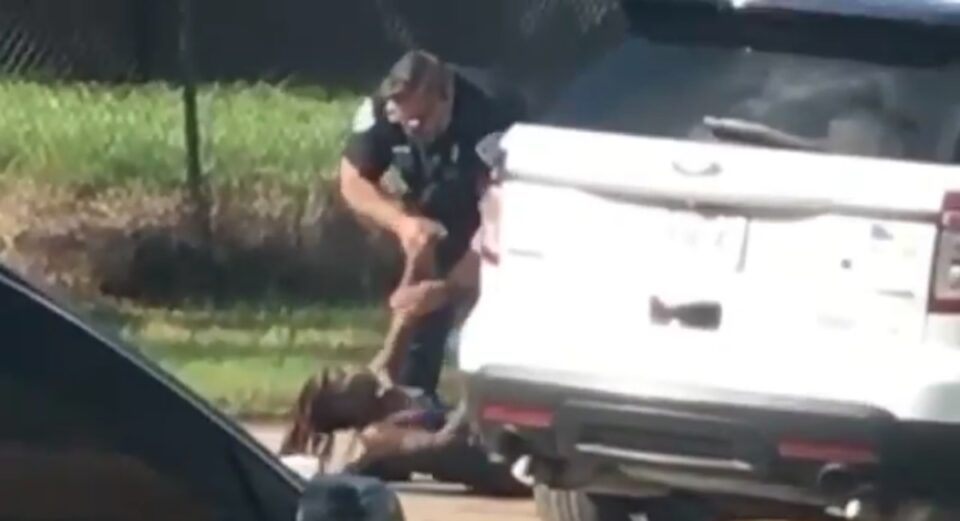 A Louisiana deputy sheriff is under investigation after video has emerged of him violently attacking Shantel Arnold for refusing to give a statement about an incident in which she was the victim.

On Sept. 20, Arnold was approached by the unidentified Jefferson Parish Sheriff officer just moments after she had been jumped by a group of neighborhood boys.

The 34-year-old, who stands 4’8″ tall and lost an eye in a previous accident, was slammed on the ground and beaten as onlookers laughed and one recorded the fight with their phone, Nola.com reports. Arnold was finally able to fend her three attackers off with a stick and her 71-year-old stepfather Lionel Gray came to her defense.

Speaking to the JPSO’s internal affairs investigator, Arnold says the officer demanded she speak to him. She responded by briefly telling him what had happened and said she wanted to go home. That’s when the officer jumped out of the car, grabbed her and threw her to the grown, Gray told investigators.

“She didn’t have a chance to pull away because, you know, this guy was strong,” he recounted. “He grabbed her arm, and some kind of move he made, and she went down to the ground. So I was walking up to him and he told me, ‘If you come any closer I’m going to kick everybody’s ass out here.’ So, I said ‘you don’t have to use that type of force on that little woman right there, she’s a midget.’”

The footage of the attack shows the officer dragging Arnold by her hair, slamming her onto the ground several times and punching her. The attack left her with a busted lip, recurring headaches, bruises and scratches, and even resulted in several of her braids being pulled out. She was taken to the hospital after other deputies called for an ambulance.

When she arrived to check on her sister, Mercedes Arnold says the officer in question tried to convince her to have Shantel committed. “He was just trying to cover up what he did by saying my sister is crazy,” she said.

In the days following the attack, the family says the deputy continued to drive past their home in an attempt to intimidate them.

According to the court records, this is the first time the Jefferson Parish Sheriff’s Office has conducted in an internal investigation, despite a history of reports of police brutality and abuse of power.