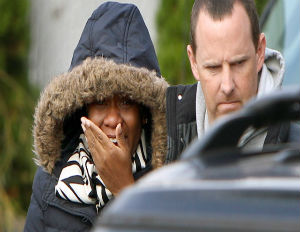 A mother whose two sons were swept out of her arms during Hurricane Sandy was left screaming on the street in Staten Island for 12 hours by neighbors who refused to help her, reports the Daily Mail.

Mrs. Glenda Moore left her Staten Island home on Monday night on her way to higher ground in Brooklyn with sons Brandon 4, and Connor 2, when her SUV was overtaken by flood waters and her two boys were swept out of her arms.

“It went over their heads,” a family member told the N. Y. Daily News. “She had them in her arms, and a wave came and swept them out of her arms.”

When she reached dry ground, Mrs. Moore knocked on one door but was told: ‘I don’t know you. I’m not going to help.’ Another neighbor refused to answer the door and she was unable to get anyone to help her call 911. She spent the night crying and wandering the streets. Her two boys were found dead on Thursday.

FacebookTwitterYoutube
← Accuser Says Cee-Lo Slipped Her Ecstasy, Had Sex With Her ← Obama Campaign Hits Back at Ad Linking Him to Castro
×