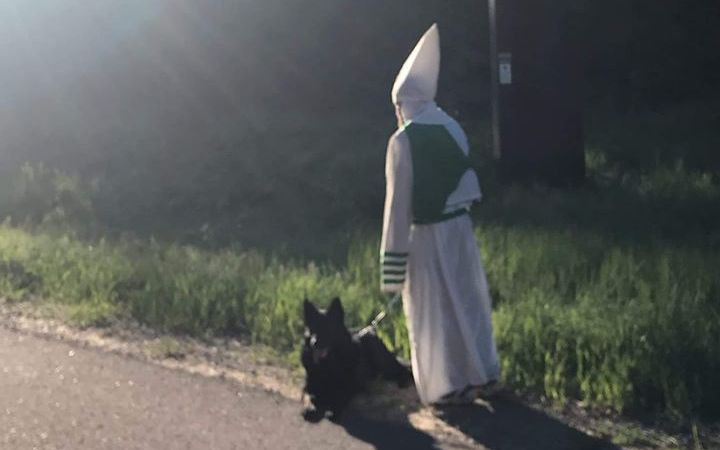 A white man was seen brazenly wearing Ku Klux Klan attire late last week while he was walking his dog and waving at traffic in Vilas County in northern Wisconsin, according to the Milwaukee Journal Sentinel.

The man, iidentified as Charles Michael Booth, 50, of Conover, was walking with his dog on County Highway K at Monheim Road on June 12. According to the Vilas County Sheriff’s Department, Conover was “out walking his dog, wearing a Ku Klux Klan shirt, drinking a beer and waving at the traffic.”

Wisconsin resident Rachel Byington posted this photo to her Facebook page to warn other people in Vilas County.

Authorities had spoken to Conover, but determined he was not creating any traffic hazard, or violating any laws.

The Vilas County Sheriff’s Department posted this press release on its Facebook page:

We thank those that have come forward and informed us of the situation, so that we may deal with it in a manner that continues to develop strong community partnerships.

The KKK is classified as a hate group by the Anti-Defamation League and the Southern Poverty Law Center. We strongly discourage this type of action in Vilas County. We will be vigilant and continue to monitor this man’s actions. Our patrol staff knows of this man and we frequently patrol this area of Vilas County.

This incident certainly is not supported by the people of Conover or the rest of Vilas County.”

Gregory Jones, president of the Dane County NAACP, called the incident is a “terrorist act.”

“(Booth) intended to project what I believe to be white supremacist behaviors by wearing this garb,” Jones said. “It is intended to create fear among people—even people who are not of color. [People in Vilas County] should be mindful and be willing to stand up and say this is not acceptable in our county at all.”

According to court records, Booth has a history of misdemeanor traffic violations and in 2013, he was found guilty of criminal damage to property.