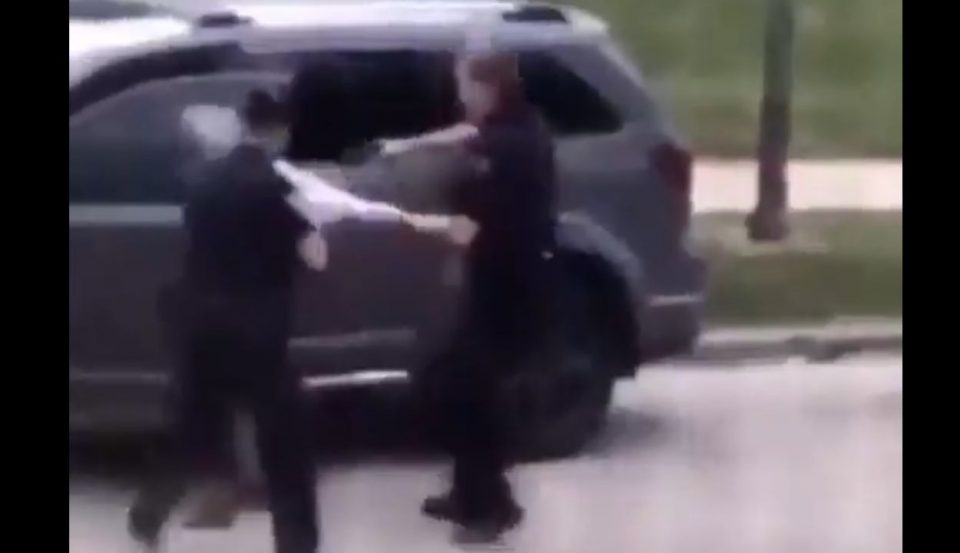 Video footage shows an unarmed Black man being shot in the back multiple times by white police officers in front of his children as he entered his vehicle in Kenosha, Wisconsin, on Sunday, according to Revolt.

The man, who was identified as Jacob Blake, was taken to the hospital where he is listed in serious condition. Early Monday, family members posted that Blake was in a stable condition at the ICU in Froedtert Hospital, Milwaukee.

The incident, which took place Sunday afternoon, is the latest in the seemingly widespread number of incidents of police officers shooting unarmed Black people while being filmed on mobile phones.

Wow. This Black man was shot several times in the back by @KenoshaPolice today. He was getting into his car after apparently breaking up a fight between two women. He’s in critical condition now. We demand JUSTICE! #BlackLivesMatter pic.twitter.com/I1reDEp4nw

Confirmed: Jacob Blake’s 3 SONS were IN THE CAR he was getting into when @KenoshaPolice shot him tonight. They saw a cop shoot their father. They will be traumatized forever. We cannot let officers violate their duty to PROTECT us. Our kids deserve better!! #JusticeForJacobBlake

Wisconsin Gov. Tony Evers released a statement via Twitter on the shooting:

Tonight, Jacob Blake was shot in the back multiple times, in broad daylight, in Kenosha, Wisconsin. Kathy and I join his family, friends, and neighbors in hoping earnestly that he will not succumb to his injuries.

While we do not have all of the details yet, what we know for certain is that he is not the first Black man or person to have been shot or injured or mercilessly killed at the hands of individuals in law enforcement in our state or our country.

We stand with all those who have and continue to demand justice, equity, and accountability for Black lives in our country—lives like those of George Floyd, of Breonna Taylor, Tony Robinson, Dontre Hamilton, Ernest Lacy, and Sylville Smith.

And we stand against excessive use of force and immediate escalation when engaging with Black Wisconsinites.

I have said all along that although we must offer our empathy, equally important is our action. In the coming days, we will demand just that of elected officials in our state who have failed to recognize the racism in our state and our country for far too long.