White Woman Slaps and Curses Out Navy Man on 9/11, Says He is a 'Fake' and 'Disgrace' 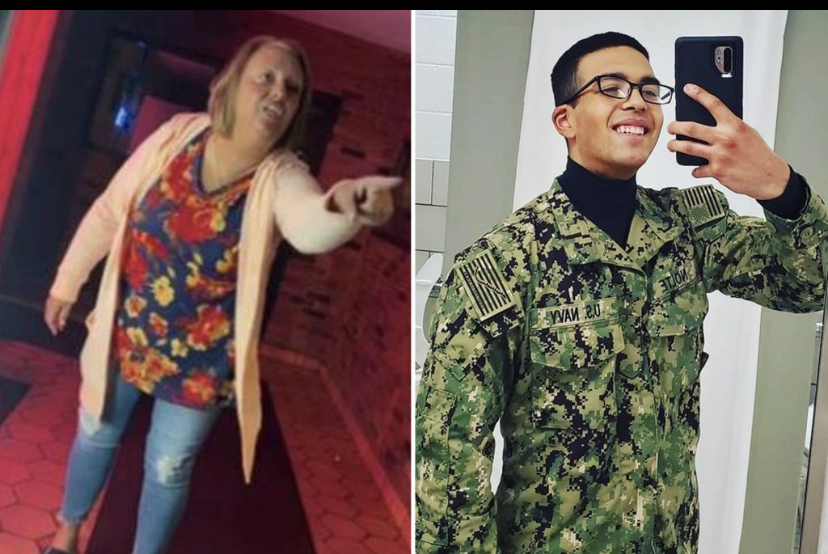 A viral video shows an irate white woman assaulting and cursing a Navy sailor, calling him a “fake” for wearing a uniform on Sept.11.

The video, posted to TikTok, shows the woman smacking the sailor, Sean Nolte Jr., in the face as he was getting food at Central Pizza in Berlin, Connecticut.

“This is disgusting,” the woman says as she picks up Nolte’s hat from a counter and throws it at him. “Disgusting! You f—ing piece of s–t!”

Someone recording the confrontation tells the woman to leave before they call the police, but the woman continued and began to insist Nolte “show his uniform” while calling him a “disgrace” to the country.

“That’s not a uniform, you piece of f—ing s–t,” the woman continues before walking out of the restaurant.

Police have yet to make an arrest, charge, or identify the woman in the video. Police, however, stated that they have a “probable identity” for the woman after getting many tips from the public

Acting Chief of Police Chris Ciuci said, “The investigation is ongoing, and when probable cause is developed, we will apply for an arrest warrant.”

The restaurant owner, Jason Bikakis, who witnessed the woman slapping the servicemember, says he has “never seen something like that.”

“Slap him, yes, in the face like she knows him for a long time,” Bikakis said.

Nolte, of Harrisburg, Pennsylvania, explained the caught-on-camera assault in a Facebook post, saying the woman had been “constantly staring” at him after she walked in.

“As she leaves, she looks at me and says ‘nice smile’ very sarcastically,” Nolte said. “I reply ‘thank you, have a nice day ma’am’ and continue about my day. Not even 30 seconds later, she comes marching back in and yells at the pizzeria staff, ‘He is a fake, by the way, my husband is in the Army.’”

Nolte also said he tried to show the woman his valid military ID.

“As I realized there was no persuading this woman that I am not a fake, I politely say, ‘tell your husband thank you for his service for me, and have a nice day,’” Nolte continued.