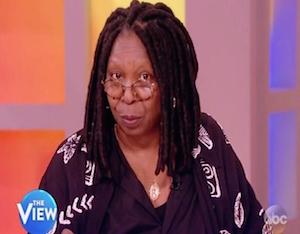 The View Whoopi Goldberg and her co-hosts spent a significant amount of Monday’s episode engaging in the real-life brouhaha involving comedian Bill Cosby.

Refusing to pass early judgment on her friend and fellow funny person, Goldberg said, “I have a lot of questions for [alleged victim Barbara Bowman]. Maybe she’ll come on [the show].” Many are honing in on allegations raised against Cosby for sexual assault and rape, but Goldberg shares her doubts over whether these accusations are legit.

“I’m sorry, having been on both sides of this where people allege that you do something—it doesn’t matter now,” Whoopi confesses. “The cat is out of the bag. People have it in their head.” The other View co-hosts quickly pointed out that during Whoopi’s time with allegations that she answered questions from the media. Although Cosby recently released a statement through his attorney, it seems that the alleged victim continues to make it known that Cosby had his own issues.

“Don’t you do a kit when you say someone has raped you?” Goldberg said, responding to Barbara Bowman’s direct allegations. “Perhaps the police might have believe it, or the hospital.” While the chatty-kathys of the show went over the fact that Cosby has engaged in paying settlements, Whoopi was quick to illuminate the audience about what that actually intends. “I can speak to settlements. Settlements don’t necessarily mean you’re guilty,” Goldberg explained.

The actor has denied Bowman’s story and has said he will not be offering any more commentary about this matter moving forward. Yesterday, the height of the allegations went up a fevered notch when noted publicist Joan Tarshis published an essay that claimed the comedian sexually assaulted her twice in 1969. To make matters worst, that was also the year Cosby released a comedic bit about slipping something called “Spanish Fly” into women’s drinks.

President Obama Pushes for Greater Innovation in the Classroom

Survey: 45% of Couples Think They’d Be Richer if They Were Single

FacebookTwitterYoutube
← President Obama Pushes for Greater Innovation in the Classroom ← Survey: 45% of Couples Think They’d Be Richer if They Were Single
×
'