We Gave Gwyneth Paltrow Permission to Use the N-Word 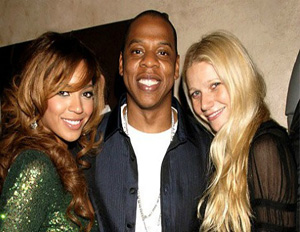 Gwyneth Paltrow, seen with Beyonce and Jay-Z is at the center of an N-word Twitter controversy. (Photo: File)

So, the N-word strikes again.

I’m usually not one to publicly comment on racial issues. I find many discussions to be quite frustrating and perplexing when the core of an argument has a racial focus.

But this time, after enough passionate office chatter about it, I had no choice.

Gwyneth Paltrow is at the center of controversy for a Twitpic, which captures Jay-Z and Kanye West during a performance, captioned “Ni**as in paris for real @mrteriusnash (the dream) tyty, beehigh.”

Paltrow, known for her roles in blockbusters including The Avengers, and Se7en, often rubs elbows with Beyonce, Kanye West, Jay-Z, and other African-American notables in the music industry. So, I wasn’t surprised by her casual use of the word, nor was I surprised at her response to the raised eyebrows. (“Hold up. It’s the title of the song!“)

It’s undeniable that the song in which she references was and still is a commercial hit, peaking at No. 5 on the Billiboard Hot 100, selling more than 2 million copies in the United States, peaking at No. 10 in the UK, and spending multiple weeks in the Top 40.

What does this mean? Paltrow’s caption or use of the word is not the major issue. It’s the fact that major figures— and the people who support and drive their success, ie. US — have made it OK for people to use the word— whether the connotation or reference has harmful intent or not.

Some of us are mad at Paltrow, but the person to blame is right in the mirror. The culprit behind the bru-ha-ha is our constant affirmation of the N-word’s use in our everyday lives, our daily habits and our consumption of popular media that uses the word as casually as a “Hi” or “Bye.”

I’ve been guilty. I would be lying if I said that I, my family, and some friends have not used the word in the past or present. Many of us grew up with it being part of casual conversation, and not just by some ignorant racist or a misguided classmate or coworker, but by those in our inner circles.

Many of my favorite hip-hop and R&B hits include multiple use of the word (as well as the B-word). In supporting these things, which have international reach, we let the world know that it’s okay for them to embrace the use of the N-word— no matter what their race or ethnicity is.

If it’s all good when Paltrow’s buddies Jay-Z and Kanye West to use it, make a hit out of it and have millions of people around the world embracing it (many who have no sense of its history or regard for that history), then it must be OK for her to do it, too.

Thanks, Mrs. Paltrow for reminding me. The rest of us need to get the memo.

There is no double standard. Until we all stop accepting the use of the N-word in any manner, these occurrences will remain a common thread of pop culture and everyday society.

I’m not calling for a boycott. I’m just saying.