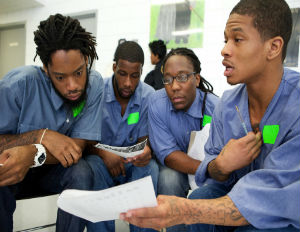 Last month, the U.S. Department of Education announced Wiley College as one ofÂ 69 selected colleges and universities that will provide postsecondary education to nearly 12,000 students in more than 100 state and federal prisons nationwide. WileyÂ was selected to participate in the program out of more than 200 applicants in 48 states.

“Wiley College is committed to the principle of educational access, and on our campus, we believe in second chances when people are equipped with the tools to succeed,â€ said Dr. Strickland. “Education is a powerful tool. It can alter the course of a life; from one filled with negativity, crime, and repeated mistakes, to one filled with hope and fulfilled promises of positive change.â€

In 1994, Pell Grant eligibility for students in state and federal prisons was eliminated as part of the Violent Crime Control and Law Enforcement Act. Last year, the U.S. Department of Education announced the Second Chance Pell Pilot Program to restore educational access for some of those individuals, improving their chances of successful and productive re-entry after they are released.

During the day-long conference, postsecondary and correctional leaders from the selected pilot programs shared ideas and heard from leaders in the field of correctional education in preparation for developing and implementing new programs or expanding existing ones.

“Expanding educational opportunity for people who are incarcerated not only improves their lives, but strengthens our communities by preparing them to contribute to society rather than return to prison,â€ said Fred Patrick, Director of Vera’s Center on Sentencing and Corrections. “We are thrilled that Wiley College is a partner in this important initiative to restore and expand access to college in prison.â€

Plan for Re-entry Into Society

WorkingÂ with three facilities in Louisiana–St. Gabriel Department of Corrections, Winnfield Correctional Center, and Madison Parish Detention Center–Wiley College will offer the following degrees: Associate of Arts, Bachelor of Arts, and Bachelor of Business Administration in disciplines such asÂ criminal justice, business administration, hospitality and tourism, interdisciplinary studies (various concentrations), and sociology, all of which are designed to be completed in two to four years. Courses will be offered online via a portal, and Wiley faculty and advisers will make periodic visits to the correctional facilities.

As a part of the re-entry plan, Wiley College will track job placement outcomes of all Second Chance Program graduates every six months for five years.

With support from the U.S. Department of Justice’s Bureau of Justice Assistance, Vera Institute is providing technical assistance to the selected Second Chance Pell sites as part of the Expanding Access to Postsecondary Education project. The project aims at facilitating the implementation and scaling up of quality higher education programs in prisons and those that work with students after they return home. It also assists with the development of policies, procedures, and practices to increase the participation of incarcerated and formerly incarcerated individuals in these programs.

This article was written by the editors of HBCUBuzz, where it was originally published. It is posted here with permission.