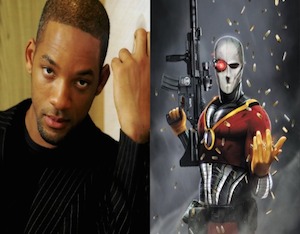 Warner Bros. threw its gauntlet into the ring versus Marvel when they announced their own super powered line-up.

Now, the studio house has jumped into the fire, fully, with the official cast unveiling of 2016’s Suicide Squad. The project, which takes the familiar concept from the DC Comics series of the same name, finds a group of villains being offered some redemption – if they’re willing to sacrifice themselves for the government.

The David Ayer-directed ensemble flick will star Jared Leto (The Dallas Buyers Club) as The Joker, Tom Hardy (who already played Bane in The Dark Knight Rises) is Rick Flag, Margot Robbie (The Wolf Of Wall Street) is Harley Quinn, and Will Smith will play his first villain role ever as Deadshot. 22-year-old British model Cara Delevingne will portray Enchantress and Jai Courtney will be Boomerang.

Jesse Eisenberg, who plays Lex Luthor in Zack Snyder’s Superman sequel, is rumored to reprise his role in Suicide Squad. Meanwhile, rumor reports are hinting that the studio is putting together a plan to approach Oprah Winfrey for the ‘Amanda Waller’ character.

Scrolling through the pages below will find out how Black Twitter reacted to the news of Will Smith’s treachery.