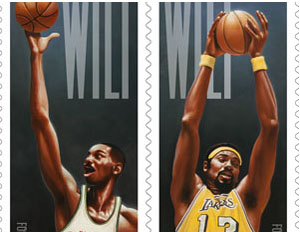 The movement started with a seven-word headline: “Postal Service Should Put Wilt on Stamp.â€ Donald Hunt, a sports columnist at the Philadelphia Tribune, wrote the 2008 article.

Inspired by Hunt’s commentary, people started calling the paper, asking about the possibility of honoring basketball legend Wilt Chamberlain with a postage stamp. Hunt instructed them to write letters, and eventually he formed a committee that drafted a petition and gathered more than 55,000Â names to support the “put-Wilt-on-a-stampâ€ campaign.

After six years of an ardent grassroots effort, Hunt was elated when the United States Postal Service and Philadelphia 76ers, along with the National Basketball Association, dedicated the Wilt Chamberlain Forever stamps–during halftime at the Oklahoma City Thunder and 76ers game in Philly on Dec. 5. Chamberlain is also the first NBA player featured on a postage stamp.

“He was literally a giant,â€ Nelson said to Black Enterprise.

Chamberlain, a Philadelphia native, was born Aug. 21, 1936. He attended Philly’s Overbrook High School, where he racked up more than 2,200 points on the court. He was also an honor roll student.

Friends called him “Wilt the Stiltâ€ and “The Big Dipper,â€ supposedly because of his height (he is 7 feet 1 inch) which sometimes required him to duck under doorways. He was a student at the University of Kansas and briefly spent a season with the Harlem Globetrotters before joining the Philadelphia Warriors.

The Forever Stamps focus on two phases of Chamberlain’s career: his days in Philly, where he led the 76ers to an NBA title in 1967; and his days with the Lakers in Los Angeles, where he left with another NBA title. Chamberlain made history during a game against the New York Knicks, when on March 2, 1962, he scored an astonishing 100 points–a feat that has not been matched.

The USPS printed 50 million Wilt Chamberlain stamps, which is unusual because from 25 million to 30 million special edition stamps areÂ released, said Mark Saunders, USPS communications director. The USPS expects to sell out the stamps and has distributed them to 30,000 locations across the country, Saunders told Black Enterprise.

The special edition stamps are selected by the Citizens’ Stamp Advisory Committee, which has 14 members as of August 2014, including famed Harvard professor and African American historian Henry Louis Gates. The group selects about 25 new stamps annually. The Wilt Chamberlain Limited Edition Forever Stamps are available in sheets of 18. Customers also have 60 days to obtain the first-day-of-issue postmarks. There are various keepsakes from a press sheet with die cut priced at $70.56, a digital color postmark set of two ($12.95), a first-day cover set of 2 ($1.86), ceremony program ($6.95), and more here.

Hunt championed a Chamberlain stamp because he wanted to inspire contemporary NBA fans like the ones who lionize LeBron James, swarm around Kobe Bryant after each game, wear long Kevin Durant jerseys, but perhaps may not know the history of basketball great Wilt Chamberlain or were too young to have seen his games.

And the appreciation for Chamberlain seems to be working.

“Wilt was in the league a generation before I became a fan of basketball, so I can’t say I was a fan,â€ Nelson admitted. “But as a current fan of the game, I respect Wilt’s place in basketball history. He deserves to be immortalized on a stamp.”