Winging It: The Gift of My Fatherâ€™s Example 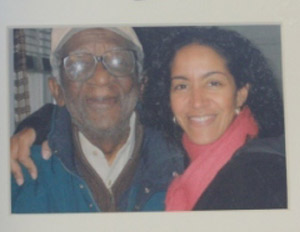 My father died on the first day of spring four years ago. Since then, the arrival of my favorite season is always accompanied by a few tears and a heavy heart. See, I was always a daddy’s girl.

Robert Clarke did all the things a good father is supposed to do. He was a great teacher, a generous provider, a big-time hugger and tickler, and my biggest fan. He told me I was smart and beautiful and worthy of the best life had to offer. He set the bar high and expected only greatness from me. But when I faltered or flat-out failed, he was always my soft place to land.

My cousins sometimes referred to him as Uncle Heathcliff because the beloved character Bill Cosby played on television, my dad actually was in real life. We had snowball fights inside the house and belted out everything from old spirituals to Stevie Wonder songs together in the car. He taught me how to lindy-hop, ride a bike and drive. He was a bit of a renaissance man, passionate about jazz, history, Africa, science, and his family–none more than the latter.

Oh, I know he wasn’t perfect. But he was mine, so the missing goes on and on. I still need his advice when I’m in a jam. I long to hear his laughter and to dance in his arms. I still reach for the phone to share big news — good and bad — only to remember all over again that he’s gone. But memories do comfort and, sifting through them, I’ve come to realize how many of the lessons my dad taught me are about work, life and the constant quest to balance the two. That balance was something my father worked at as much as my mother did. And that, for a man — especially of his generation — was rare.

His dreams were huge, especially compared with his humble beginnings. But they were finite. He attained advanced degrees, married and had children, owned a home, travelled, even lived and worked abroad. But he never owned a second home (“For what?â€ he’d ask, genuinely mystified) and once he’d been everywhere he wanted to go in the world, no matter how much he’d loved a place, he saw no reason to go back (“Why risk ruining it?â€ he’d say).

My dad hammered home the notion that if you love what you do you’ll never work a day in your life. A chemistry professor at a public college, he approached his job with total dedication and gusto. He loved the students, the labs, the office hours, and class time. But he loathed the unavoidable paperwork and politics of being an administrator. So he turned down repeated offers to chair his department and become a dean. He declined advances made by more prestigious institutions as well, living his belief that poor people deserve a top-notch education as much as anyone. Never enticed by the higher status or pay of such opportunities, never caring about what “the Jonesesâ€ had or thought, my dad stayed true to himself.

Lung cancer kept him bedridden for months before he died. During that time, we laughed and sang and talked a lot about his past. Regrets? Like Sinatra, he had a few. But he’d lived the life he imagined, and he was content.

It’s that contentment I seek in my own life, to possess the courage, the confidence and the clarity to be satisfied. To achieve that soul-deep sense of assurance that says, “You’re good enough right where you are.â€ That’s true balance. That’s true wealth. That’s the gift of my father’s example.