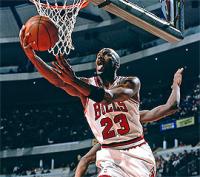 Executive Vice President for People Susan Chambers, who introduced Jordan to the audience, used his appearance as an opportunity to fire up Wal-Mart associates and share his views on winning. Here’s her questions and his responses about what it takes to win:

Chambers: With all your achievements, how do you strive to do more?

Jordan: Hard work…desire to win, work hard, make people proud.I’ve developed relationships over the years with Nike, Hanes and Gatorade and I have continued to maintain them. I operate the same way in life that I’ve done on the basketball court.

How do you balance being an outstanding individual performer and being part of a team?

I always tried to be the best basketball player I could be, but I couldn’t win without a strong team. It’s just like Wal-Mart; all of you need a strong team to win.

You have a strong history for community service, share with us what motivated you to do such work?

My motivation came from my parents, and that gave me the belief that it was okay to help others. I’ve always held the vision that no matter how high I went, I would always help others.

Derek T. Dingle is the editor-in-chief of Black Enterprise magazine