President Biden Heads To Capitol To Save Agenda, Align Democrats 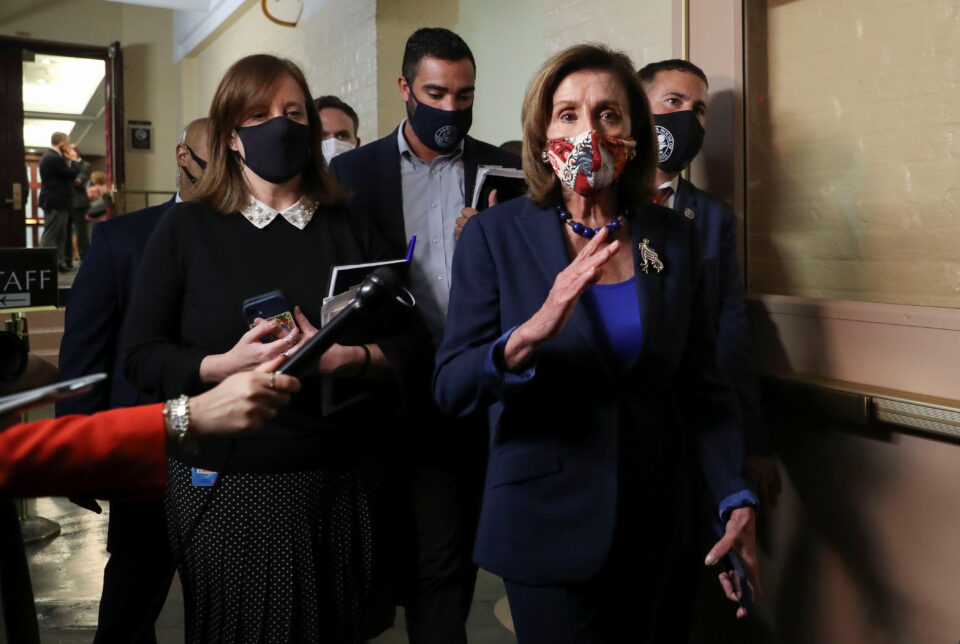 U.S. Speaker of the House Nancy Pelosi (D-CA) talks with reporters as she leaves a lengthy Democratic caucus meeting in the U.S. Capitol building as negotiations continue on the fate of the bipartisan infrastructure bill on Capitol Hill in Washington, U.S., October 1, 2021. REUTERS/Leah Millis

Reuters – President Joe Biden was due to meet with his fellow Democrats in Congress on Friday, as progressives and moderates in his party remained divided over two massive spending bills that account for much of his domestic agenda.

Democrats have struggled to coalesce around those two bills. Progressives have vowed to block a $1 trillion infrastructure bill without an agreement to advance a larger social spending and climate change bill. Moderates say that bill’s current $3.5 trillion price tag is too high.

After a two-hour party meeting, Democratic leaders in the House of Representatives did not appear to have a clear plan. Representative James Clyburn, the chamber’s No. 3 Democrat, said he had “no idea” whether there would be a vote.

But Representative Hakeem Jeffries, who is among Democratic leaders in the chamber, said he expected the House to vote on the infrastructure bill on Friday, one day later than planned. “I expect a vote today, and I expect that bill will pass today,” he said.

House Democrats are waiting for an “iron clad” agreement from the Senate as to what its members could agree to, he said.

“We are working on trying to get to a place where everybody is comfortable,” No. 2 House Democrat Steny Hoyer told reporters.

The White House said Biden would travel to Capitol Hill to speak with Democrats later in the day.

With a narrow majority in the House, Biden’s party cannot afford to lose too many votes on the infrastructure legislation, which would double spending on roads, pipes and other infrastructure. The bill has already passed the Senate with bipartisan support.

Democrats said they also planned a vote to ensure that transportation funding, which expired on Thursday, is not disrupted while they continue to negotiate.

Ahead of the meeting, Representative Pramila Jayapal, the influential chair of the 95-member House Progressive Caucus, said the smaller bill could not pass without agreement on the larger, multi-trillion-dollar one.

“I kept telling her that we didn’t have the votes, and I knew she knew that,” Jayapal said of House Speaker Nancy Pelosi.

Progressives are angry that two Senate moderates – Democrats Joe Manchin and Kyrsten Sinema – oppose the size of Biden’s “Build Back Better” plan to boost social spending and fight climate change. The Senate is split 50-50 with Republicans, all of whom oppose the multi-trillion-dollar bill, so every Democratic vote is needed for passage with Vice President Kamala Harris the tie breaker.

Manchin has proposed a spending package of about $1.5 trillion. Sinema on Thursday declined to say whether she agreed with Manchin’s proposal. She has met with Biden multiple times to discuss the bill. She was home in Arizona on Friday but remained in touch with the White House, a spokesman said.

Democratic Representative Dean Phillips, a moderate, said he wanted to see a vote on the infrastructure bill, even if it was not certain that it would pass.

House Republicans are unlikely to help pass the infrastructure bill, eager to deny Biden a policy victory ahead of the 2022 midterm elections, when history favors their chances to recapture majorities.

Congress, which averted a politically damaging government shutdown on Thursday, has little time to focus on the infrastructure fight due to another fast-approaching deadline: the debt ceiling.

A historic U.S. debt default could occur around Oct. 18, Treasury Secretary Janet Yellen has estimated, if Congress fails to give the government additional borrowing authority beyond the current statutory limit of $28.4 trillion.

Republicans want no part of the debt limit increase, saying it is Democrats’ problem since they control Congress and the White House. Democrats note that about $5 trillion of the nation’s debt is the result of tax cuts and spending passed during Republican Donald Trump‘s presidency.

The House approved a bill late on Wednesday suspending the debt limit through December 2022. The Senate could vote on it “as early as next week,” Senate Majority Leader Chuck Schumer said, but Republicans are expected to block it again as they have twice before.