With Jay-Z and Roc Nation Sports, #NewRules For Kevin Durant 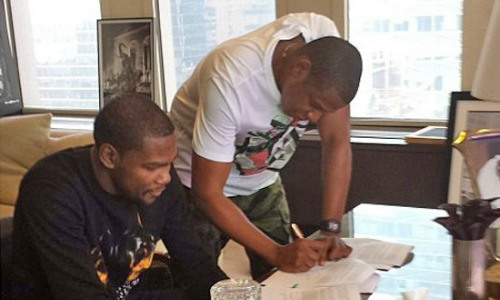 Kevin Durant Instagrammed a photo of he and Jay-Z signing a contract for Roc Nation Sports.

Kevin Durant paused. He took a stutter step — not unlike one that separates him from his defender for a tear drop or finish at the rim — until someone summoned him. Deciding that it was too late now, he bounded up the stadium-style seating at Manhattan’s 40/40 Club against oncoming traffic: daps, onlookers, smiling faces, flashing lights. He was loathe to interrupt an auction for Robinson Cano’s Super Heroes Fundraiser and Dominoes Tournament. Durant took his place, greeting Cano himself, Yankees pitcher CC Sabathia, Vice President of Roc Nation Sports Rich Kleiman, Executive Vice President Def Jam Sean Pecas and, finally, Jay-Z.

Just hours earlier, Durant posted a picture to his Instagram, confirming the since-rumored move. “Grateful for this opportunity with Roc Nation Sports,â€ it read above the photo. “It’s go time.â€ The date was June 24.

Said Jay-Z: “He has a 90.5% free throw shooting rate, the youngest player in NBA history to join the 50-40-90 club, a giving individual and a legend in the making. What more can I say?â€ Hov’s affirmation that there’s never been a player this good or this young, is for all of Durant’s humility that has made him basketball’s golden child prince to Lebron James’s king, signals that the hashtag accompanying the photo and the marketing surrounding Jay-Z’s new album, Magna Carta Holy Grail: there really are #newrules.

This week, Durant, the Oklahoman’s Darnell Mayberry, said that joining Roc Nation means nothing as it relates to his basketball career.

But you can certainly understand their concern. Deep below the cranky dubstep bassline and the galaxy of synths flourishes of Watch the Throne’s “Who Gon Stop Me,â€ Jay-Z considered his formidable momentum as it concerns expanding his business: “No brakes; I need State Farm.â€

The message? Even if you tried, you’d have a hard time stopping Jay-Z.

Funny, that same bit of invincibility could certainly apply to the rapid pace at which Hov’s Roc Nation Sports is growing. In terms of ambition, Jay-Z has never been shy about his aspirations; he struck an emotional chord when, at his series of concerts which opened in the Barclays Center in Brooklyn, he spoke passionately about how he’d grown up not far from the stage he was standing on to become an owner of a sports franchise. At the Made in America festival, which he founded and headlined last summer in Philadelphia, President Obama told the crowd that Jay-Z’s story was uniquely American as he implored voters to get out there and vote.

Anything, those larger-than-life moments stressed, is possible. And now comes Durant and Skylar Diggins and Dale Earnhardt Jr., and Victor Cruz changing the landscape of sports with a connection with Jay-Z and Roc Nation.

If nothing else, Durant was able to take in the relative opulence of what his new team brings to the table Monday night. Foundations like Cano’s are an integral aspect of a player’s public profile and marketability, because they bring publicity and awareness to causes the athletes care about. Durant has the Kevin Durant Family Foundation, from which he donated $1 million to the Red Cross for recovery efforts after the series of devastating tornadoes this past spring.

For Cano, Marvel brought in actors to play Spiderman, Captain America and Iron Man. A well-heeled crowd that included model Jessica White, and music producer Sean Garrett sipping on Jay-Z’s Ace of Spade champagne and D’usse cocktails. The auction items were impressive, too: a day with the Yankees All-Star second baseman, tickets to the final day at the Masters, swimming lessons with Ryan Lochte.

For some, the move to Roc Nation was a surprise for a young man in Durant who, amid the hoopla of LeBron James and The Decision, simply took to Twitter with a brief announcement that he was signing an extension, admitting that he cried. He reportedly signed the contract at home.

Later that evening, before a crowd at Best Buy Theater just a few blocks uptown, Durant was announced by the D.C. rapper Wale as “the newest Roc boy,â€ before a crowd. The 6-9 star who plays more than 100 games a year in front of 20,000 fans a night looked visibly uncomfortable, and took in the entire show sitting on the side of the stage. There are new rules now, and Kevin Durant is set on playing by them.